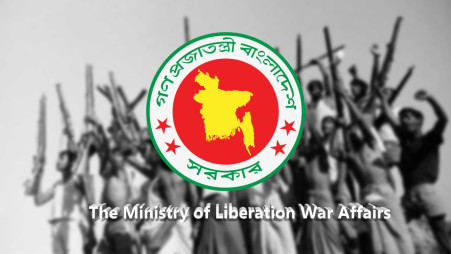 Dhaka, May 26  : The allowance for the valiant Freedom Fighters of the country is going to see a significant jump of 66.66% in the coming 2021-22 fiscal.However the budget allocation for the purpose would not see a massive rise as the number of Freedom Fighters fell by 23.37% in the new published partial list of the Liberation War Affairs Ministry.
The total allocation for the purpose in 2019-20 and 2020-21 fiscals was Tk 3385.05 crore each.
The allocation was Tk 3200 crore and Tk 2996.15 crore in 2017-18 and 2018-19 fiscals respectively.
According to the available data, the allocation was Tk 2196.06 crore for around 185,000 Freedom Fighters in 2016-17 fiscal whereas the amount was Tk 1920 crore for 180,00 freedom Fighters in 2015-16 fiscal.
For 200,000 Freedom Fighters the amount was Tk 1200 crore in 2014-15 fiscal while Tk 700 in 2013-14 fiscal.
The number of government listed Freedom Fighters to be provided allowances was 150,000 in 2012-13, 2011-12 and 2010-11 fiscals. In these thee fiscals the allocated money was Tk 360 crore each.
The number in 2009-10 fiscal was 125,000 where the government had to allocate Tk Tk 225 crore and in 2008-09 fiscal the allocation was Tk 108 crore for 100,000 Freedom Fighrs.
The Prime Minister in February of this year had made an announcement while inaugurating the transfer of monthly allowance to freedom fighters and their families through electronic fund transfer system of the Bangladesh Bank that the allowances of the Freedom Fighters who are getting Tk 12,000 per month would be Tk 20,000 from the next fiscal.
At that time, the number of valiant Freedom Fighters who were in the government list was 205,206.Of them, the families of martyred war heroes are getting Tk 30,000 a month, while that of war-wounded ones are getting Tk 25,000.
The families of the seven Bir Shresthas, the highest gallantry award, are receiving Tk 35,000 while recipients of Bir Uttams get Tk 25,000, Bir Bikram Tk 20,000, and Bir Pratik Tk 15,000. The rest freedom fighters get Tk 12,000.
Wounded freedom fighters get free medical care and those without homes get housing.
Freedom fighters also get five festival bonuses from the government.
But in March 25, Liberation War Affairs published a partial list of Freedom Fighters containing 147,537 names while in May 9 it has published the final list (second part) of the names of the heroic freedom fighters (FFs) including an additional 6,988 names.
Liberation War Affairs Minister AKM Mozammel Haque while publishing the partial list told that the final list of freedom fighters will be published by June 30 after further scrutiny of the list of the freedom fighters who are getting allowances.
According to the sources in the Liberation War Affairs Ministry, the officials of the Ministry are working to prepare the list for finalising the number of the lists of Freedom Fighters, who will get the allowances.
“Soon the number and the total money will be sent to the Finance Ministry,” a senior official said, reports UNB.