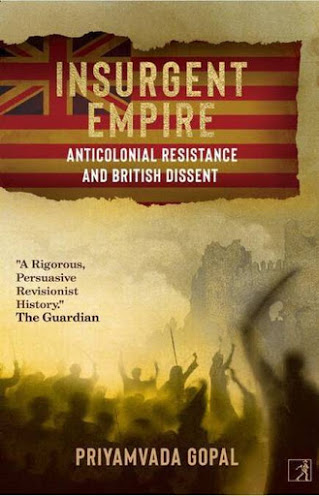 Sudhirendar Sharma
This study busts the persistent myths about colonialism, also detailing how many Britons turned against their empire’s endless oppression. There is an unmistakable stamp of authority in Priyamvada Gopal’s unravelling of the compelling history of self-determination by the enslaved colonial subjects in her magisterial new book Insurgent Empire. Having courted early controversy in questioning the assertion of the Empire benevolence over its subjects by historian Niall Ferguson on an infamous 2006 BBC show, Gopal has shown courage of conviction in confronting the imperial amnesia by conforming that the colonized people were active agents in their own liberation. In more ways than one, Insurgent Empire is a credible revision of the colonial history, and the struggles of the oppressed against the oppressor.

Making a significant contribution to the colonial history, Gopal lends an authoritative rejoinder to the sustained view that the empire was a necessary undertaking to civilize the natives. Historical accounts provide evidence to the contrary as natives remained hostile towards any such undertaking by the colonial enterprise. In the words of lawyer and jurist John Bruce Norton, who claimed to have foreseen the great Mutiny, the pedagogic value of the sepoys’ asking the British to examine their own betrayals called for a certain kind of reverse tutelage, seeking the oppressor to learn from the oppressed. In a sense, it was a call for the ruling elites to bend their ear low to their subjects – to listen and integrate. In contrast, the enclaves of power did just the opposite.
Following the mutiny, the colonial system had reduced itself to producing grinding situations for the peasants in the late 19th and early 20th century. The sustained unrest among the masses was vividly captured by many critics of the empire, who found that cataclysmic revolt was not altogether impossible. For Keir Hardie, the Labour Party pioneer and a natural-born critic of the imperial project, the dissatisfaction with imperial rule was deep-rooted to warrant convulsions; for journalist Henry Nevinson the power of resistance had made thoughts of imperial benevolence obsolete; and for future British Prime Minister Ramsay Macdonald, renascent national pride had taken roots from the idea of Swadeshi. Insurgent Empire provides clear evidence that the resistance to the empire had generated dissent around the imperial project within Britain as well, which had emboldened the movement and lent support for self-rule to become a reality.
It is an instructive reading on how Indian agency became a currency that the empire could no longer ignore, and which only helped its own working class learn that their oppression wasn’t any different from the injustice unleashed by their ruling elite in the faraway land. In these times when popular dissent is viewed with utter disdain, Insurgent Empire makes for gratifying reading in getting a layered sense of how dissent in the colonial contexts can be interpreted to revise and radicalize existing dissenting tendencies. With the history always in the quest of repeating itself, Gopal’s use of the narrative texts of anti-colonial resistance helps to elucidate the relationship between ‘outside’ and ‘inside’. Howsoever marginalized, it is clear that dissent must articulate itself against the grain of the dominant at all times.
Insurgent Empire makes somewhat different reading of the natives’ movement for emancipation. It articulates freedom as a human desire for self-assertion, which spread like wildlife among the suppressed across colonized lands. It argues that the treatment of resistance as mere episodes harbours a serious cost, which both the oppressed and the oppressor had to bear. One can find a sense of discovery in the manner in which Gopal has interrogated the diversity of records in weaving a comprehensive history of anti-colonialism, and its subsequent implications. Besides the political and historical, the voluminous study provides insights on the difficulties that the empire encountered in understanding the native mind. It threw open the problematic of engaging with subjugated others with whom a common ground of reconciliation was never found.
What is more disturbing, however, is the persistence of colonial mythology in the minds of British public and its political masters that the ideas of freedom and liberty were indeed bestowed on the colonial subjects by their imperial masters. No surprise, therefore, that successive British prime ministers have repeatedly asserted that ‘the days of Britain having to apologize for its colonial history are over’, as the greatest ideas of tolerance, liberty and civic duty have been endured by the British. Gopal has painstakingly tried to undo this mythology systematically, urging Britons to interrogate such mythologies that they are routinely invited to consume, and instead lay claim on more challenging history of their own emancipation in the wake of the widespread rebellion. Insurgent Empire is an ambitious undertaking that argues against disdainful dismissals and active silencing of dissent and resistance to fully decolonize the minds of the powerful in the postcolonial world.
Insurgent Empire
by Priyamvada Gopal
Simon&Schuster, New Delhi
Extent: 607, Price: Rs 799.
First published in weekly Outlook, issue dated Sept 28, 2020.
(Sudhirendar Sharma is a writer on development issues based in New Delhi, India)