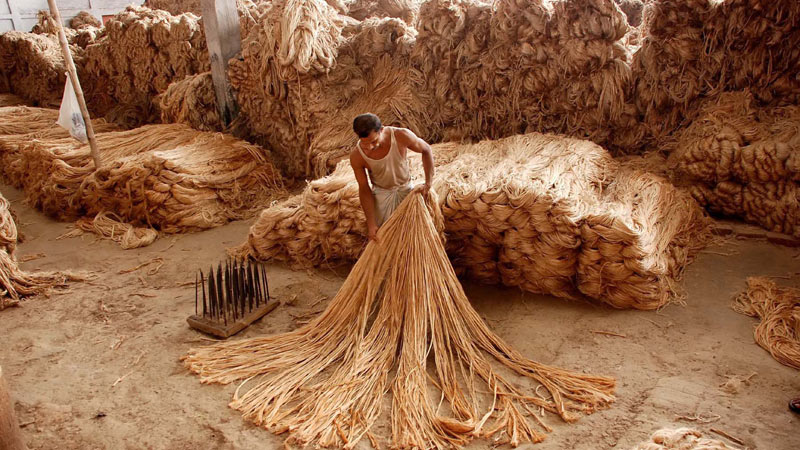 Khulna, May 10 : A major cash crop for over three million small farm households in Bangladesh, jute is no longer considered a ‘golden fibre’ in Khulna. Unfavourable weather, low production and lack of government support have forced many farmers in the country’s southwestern district to turn away from the crop in the past couple of years.One of the most affordable natural fibers, jute is a biodegradable product used for making carpets, ropes and bags. The United Nations has long been advocating the use of jute products as a green alternative to plastics to help save the environment.
And at a time when Prime Minister Sheikh Hasina’s government seeks to diversify exports to help the country tide over the Covid-induced economic crisis, jute farmers in Khulna say exports to countries, including India, Pakistan and China, are likely to take a hit this year. India and Pakistan are Bangladesh’s two largest markets for raw jute exports.
Farmers say cultivating jute is backbreaking work as the crop takes eight to 10 months to mature. And once the crop is ready, it has to be cut and soaked in water. Subsequently, jute has to be separated, dried and pressed into bales.
“Last year, Khulna farmers suffered huge crop loss due to Cyclone Amphan and consequent flooding. There was also no government support as such. This year, jute production has been hit in the district and adjoining areas due to hostile weather. So, it will not be possible for us to export the desired quantity of raw jute to India, Pakistan and China,” says a farmer.
UNB has learnt that jute exports from Khulna’s Daulatpur through the Mongla seaport have already halved this year as compared to 2020. Not only in Khulna, jute production has also been hit in Faridpur, Rangpur, Jashore and Satkhira districts.
Moreover, jute farmers have not been getting a fair price for their crops for the past five years. Frustrated, many have shunned jute farming this year.
According to sources in the Khulna jute department, some 1,75,200 bales worth Tk 18.39 crore were exported in the last fiscal. But in the first nine months of the current financial year, only 69,000 bales of jute worth Tk 84.92 crore have been exported.
Exports to Pakistan, China and Belgium take place through the Mongla seaport, while it’s sent to India via the Benapole and Banglabandha borders. Akunji Brothers, Roshni Kabir, SR Jute, Namfa Trade Int, Yasin Brothers, Mamun Jute, Ripon Enterprise and Rifat Enterprise are some of the leading jute export firms in Bangladesh.
Assistant Director of the department of jute, Sirajul Islam, admits that jute exports have slumped over the past two-three years. “However, in the past three decades, there has been no such crisis in Daulatpur at least,” he says.
Daulatpur jute exporter Sheikh Shahidul Islam says the jute mills in the eastern Indian state of West Bengal depend on raw jute from Bangladesh. “India buys the jute that is produced only in the Faridpur region. Low production will batter exports,” he adds.