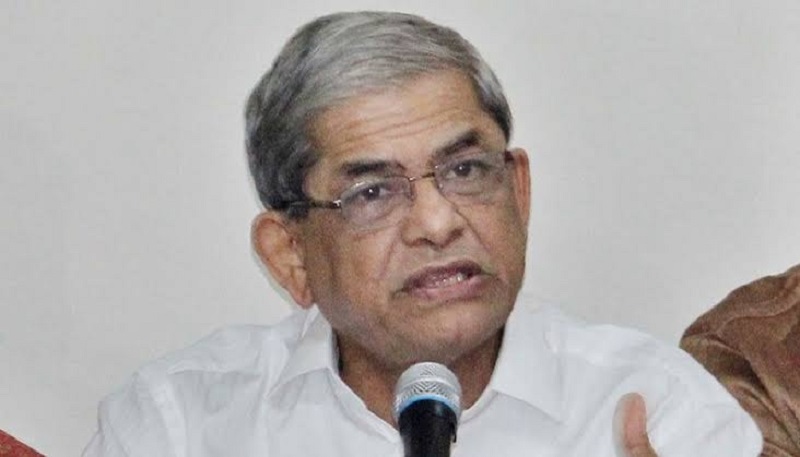 Dhaka, Mar 11 : BNP on Thursday alleged that the government is using a ‘dangerous’ law like Digital Security Act to repress people and ‘snatch’ their freedom of expression in a bid to cling to power.
Speaking at a protest rally, party Secretary General Mirza Fakhrul Islam Alamgir also said nothing can stop their party’s ongoing movement to oust the current government.
“The Digital Security Act is a terrible law that was enacted to snatch the freedom of speech and the freedom of press,” he said.
The BNP leader said the government has been in power by using the state machinery as it usurped power through nighttime voting. “This usurper regime has formulated the Digital Security Act just to prolong its power through repressive acts.”
He demanded the government immediately revoke the Digital Security Act and free all those arrested under the law.
BNP’s Dhaka south city unit arranged the rally in front of the Jatiya Press Club protesting derogatory remarks against party founder Ziaur Rahman and the recent deaths of writher Mushtaq Ahmed and journalist Borhan Uddin Mujakkir. The programme was also meant for mounting pressure on the government to repeal the Digital Security Act.
Fakhrul appreciated cartoonist Ahmed Kabir Kishore for filing a complaint with a court over being subjected to torture in custody.
“Cartoonist Kishore was brutally tortured. It’s also got exposed on Facebook about how Mushtaq Ahmed was killed in prison. “I would like to thank Kishore for lodging the complaint over the brutal torture on him,” he said.
The BNP leader urged all to come forward with courage to establish their rights and remove the darkness. “We must be vocal through democratic manner to defeat the autocratic regime as it has destroyed the spirit of our Liberation War,” he added.
Fakhrul said their party will intensify the ongoing movement demanding a credible election under a neutral government and the impartial Election Commission in an effort to establish a pro-people government and parliament. “Let’s get united to achieve that goal. Nothing can stop us. We’ll move forward together with people.”
He also expressed anger as he said many BNP leaders and activists were obstructed from joining the programme.
Huge law enforcers had been deployed in and around the Press Club since morning to maintain law and order as police and BNP activists locked into a series of clashes a few days back at the same spot.
However, the programme ended peacefully with the participation of several hundred leaders and activists of BNP and its associate bodies, reports UNB.