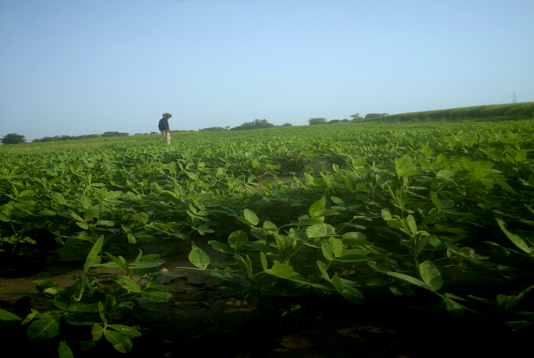 Growers are dreaming of good yield of groundnut as they are enjoying suitable weather since sowing stage of the cash crop here in this current season.
Royez Uddin and Ahammed Ali, two farmers of Char Mazar Diar under Paba Upazila, have jointly brought five bigha of land under groundnut farming this season.
Suitable weather and couple of rains help healthy growing of plants which are now fruit setting stage. The farmers are expecting cherished yield if the
crop does not face any natural disaster till harvesting.
Royez Uddin said sandy lands are suitable for groundnut farming. For this reason, more cultivation of the crop was taken place in Padma riverbeds in
Rajshahi. He said farmers of the areas are now showing interest to cultivate groundnuts on more lands.
The government has extended training, fertilizer and seed to the farmers in order to expand China groundnut in the region.
Monjurul Haque, District Training Officer of Department of Agriculture Extension (DAE), says groundnut cultivation becomes popular among the farmers in char area of the district. Groundnut can be cultivated in sandy lands. So farmers can earn profit from low cultivation cost.
He mentioned that 363 hectares of land in Padma char have been brought under nut cultivation this year while it was 120 hectares last year. The DAE
is encouraging farmers in nut cultivation.
Agriculturist Haque said about Taka 5,000 are spent for groundnut cultivation per bigha of land, from where five to six maunds of groundnut can be grown.
Groundnut farmer Golam Mustafa said last year he cultivated nut in one bigha of land and earned Taka 10,000. This year, they cultivated nut in three bighas of land. If the weather remains favourable, the farmers expect bumper yield.
Talking to BSS here Thursday Sharmin Sultana, Upazila Agriculture Officer in Paba, said nut cultivation has increased in char areas beside the Padma
River. They supplied seeds to the farmers on behalf of the DAE to encourage them in nut cultivation.
Shamsul Haque, Deputy Director of the DAE, says nut cultivation is increasing in Padma char areas in Godagari, Paba, Charghat and Bagha Upazilas of the district. The government offered free seedlings and trainings on proper nut cultivation techniques, which will help them expand the cultivation.
Groundnut is generally cultivated on the sandy land. Experimentally some local farmers started to cultivate groundnut on their barren land which
remain uncultivated all the year in this char areas for last few years.
On their success a number of farmers now are cultivating groundnut as cash crop in the vast char areas. The char farmers are getting reasonable price of the crop.
He said around 64 bigha of lands was brought under the crop cultivation in Char Mazar Diar and Char Khidirpur areas this season. Till now, the farming remains in satisfactory condition.
Farming one bigha of land require cost of Taka five thousand and that can give yield eight to ten tons. Farmers become benefited if they can sell their
harvested crop at Tk 1,500 per mound, said Agriculturist Haque.
He said a minimum financial involvement is needed for groundnut cultivation. The farmers cultivated groundnut on around 1,000 bigha of land here this season.
Dr Sakhawat Hossain, Senior Scientific Officer of Bangladesh Agriculture Research Institute (BARI), said the prospect of BARI groundnut cultivation is
bright in different char areas.
He said sandy lands near the river banks and char areas are suitable for groundnut cultivation. They are encouraging farmers to bring more land under cultivation of BARI groundnuts, an oil-enriched seed variety, he added, reports BSS from Rajshahi.