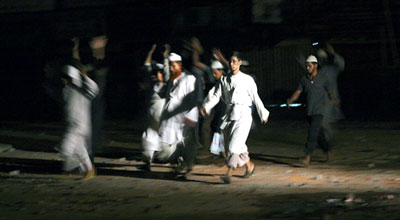 In a pre-dawn drive, law-enforcers, including police, BGB and Rab personnel, on Monday removed Hefajat-e-Islam activists from the city’s Shapla Chattar area.
According to different agencies 37 persons died in the action at dead of night. Hefajat sources claimed at least 1000 deaths.Police and Rab sources said they started the drive at about 2.20 am and drove out the Hefajat men from Shapla Chattar area by 3 am, firing rubber bullets and sound grenades.
They said some 10,000 law-enforcers took part in the drive that first started from Notredame Collage point then Ittefaq Intersection. The entire area was rocked by gunshots and sound grenades.
Amid the massive drive, the Hefajat men retreated fast and ran into various lanes and alleys in the area although they had first tried to resist the law-enforcers showering them with brick chips. It was not still clear how many Hefajat men were injured in the predawn drive.
With its tens of thousands of activists, Hefajat began its rally at 3.00 pm on Sunday after the end of its high-voltage Dhaka Siege and turned it into a sit-in programme.
On Sunday night, Hefajat-e-Islam Bangladesh Ameer Allama Shah Ahmed Shafi said their ‘peaceful’ Shapla Chattar sit-in will continue until their 13-point demand is met.
The Hefajat men started gathering in Shapla Chattar and adjacent areas from 12pm on Sunday as the government finally allowed the Islamist group to hold its grand rally there at 3pm.
Activists of the group joined the rally from different parts of the country in processions chanting slogans in favour of their demands.
The much-hyped Dhaka Siege programme of Hefajat-e-Islam began after Fajr prayers on Sunday detaching the capital from the rest of the country.  Thousands of activists of the Islamist organisation blocked roads at six points—from Abdullahpur to Tongi Bridge, Gabtali Mazar Road to Aminbazar Bridge, Babu Bazar Bridge, Demra Bridge, Kanchpur Bridge and Postagola Bridge shortly before dawn.
They were seen standing with sticks, different types of flags, including the national flag, while some reciting verses from the Holy Quran. Dry food like biscuits and puffed rice along with bananas were being served among the demonstrators.
Hefajat leaders, however, claimed that their supporters were not involved in the mayhem. Rather, the government supporters carried out attacks to shift the blame onto the Hefajat activists.
Hefajat’s 13-point demand includes passing a law in parliament with a provision for the maximum punishment of death sentence to check defaming
Allah, Prophet Mohammad (PBUH) and Islam and smear campaigns against Muslims, putting an end to the infiltration of all alien culture, including adultery and free mixing of males and females and officially declaring Qadianis (Ahmadiyyas) as non-Muslims. UNB

Banglanews24.com reported: Thousands of activists of Hefajat-e-Islam fled from Motijheel and Shapla Chattar following combined drive of Rapid Action Battalion, police and Border Guard Bangladesh personnel early Monday.
Earlier, the activists were requested to leave the venue and Law enforcers started the drive at around 2:30am to disperse them as they decided to not leaving the venue without getting order of Allama Shafi.
Law enforcers opened blank fires, tear shells and blasted sound grenade to take the situation under control.
Earlier, the leaders and activists of Hefajat-e-Islam decided to stay at Shapla Chattar without getting order of Allama Shafi on Sunday.
They took position at the venue from early hours of the day during their Dhaka siege programme to press home their 13-point demand including trial of atheist bloggers.
The leaders of Hefajat forewarned that they would not leave the venue without giving further order of Allama Shafi and until their demands are met.
At least three people were killed and hundred others injured as violence was escalating amid Hefajat-e-Islam’s grand rally on Sunday.