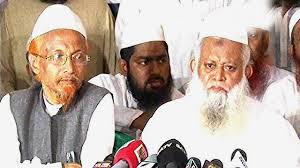 Amid the escalating violence, the massive rally of Hefajat-e-Islam at the city’s Shapla Chattar continued on Sunday with a threat to continue it until its 13-point demand is met.The rally formally began around 3pm with the recitation of verses from the Holy Quran with Dhaka city unit convener of Hefajat Nur Hossain Kashemi in the chair.
Leaders of different tiers of the Islamist group addressing the rally threatened that they will not return home until the government meets their demands.
They alleged that government and ruling party men were obstructing Hefajat men at different points of the city from coming to Shapla Chattar. They urged the government not to resist their activists or create any obstacles to their peaceful programme. Or else, they threatened to give a befitting reply. “Where there’ll be a resistance there’ll be a fight.”
The Hefajat leaders also demanded immediate release of daily Amar Desh acting editor Mahmudur Rahman.
Urging the government to amend the Constitution to implement their 13-point demand, they said the constitution is for people. If the values of Islam could not be protected, it will be quite impossible to protect the country’s sovereignty.
The leaders also claimed that the country’s people as well as almost all political parities directly or indirectly extended their support to the 13-point demand, including execution of the atheists who defamed the Prophet Mohammed (PBUH) and Islam.
The Hefajat leaders said the law enforcers indiscriminately fired on Hafajat activists at different points in the city. They threatened that they will enlist the names of the law enforcers who are attacking them if the law enforcers do not stop firing.
They also alleged that a vested quarter is attacking different establishments, offices and even embassies to put the blame on the Hafajat. They demanded the government ensure necessary security of the foreign embassies.
Ameer of the Islamist group Shah Shafi Ahmed will address the rally as the chief guest and is likely to announce their next programmes to realise their demands.
The Hefajat men started gathering at Shapla Chattar and adjacent areas from 12pm as the government finally allowed the Islamist group to hold its grand rally there at 3pm.
Activists of the group are joined the rally from different parts of the country in processions chanting slogans in favour of their demands. The Dhaka Metropolitan Police (DMP) gave permission to Hefajat-e-Islam Bangladesh for holding the rally at Shapla Chattar at 3pm on certain conditions.
The much-hyped Dhaka Siege programme of Hefajat-e-Islam began after Fajr prayers early Sunday detaching the capital from the rest of the country. Thousands of activists of the Islamist organisation blocked roads at six points—from Abdullahpur to Tongi Bridge, Gabtali Mazar Road to Aminbazar Bridge, Babu Bazar Bridge, Demra Bridge, Kanchpur Bridge and Postagola Bridge shortly before dawn.
They were seen standing with sticks, different types of flags, including the national flag, while some reciting verses from the Holy Quran. Dry food like biscuits and puffed rice along with bananas were being served among the demonstrators.
Meanwhile, at least three people were killed and 200 others injured in the clashes among Hefajat men, Awami League activists and police in the city’s Bangabandhu Avenue, Purana Paltan and other areas on Sunday. A DC traffic office, two police boxes and 32 vehicles were also torched by miscreants.
The law enforcers fired more several hundred rounds of teargas shells and rubber bullets to bring the situation under control.
Panic gripped the city dwellers as violence escalated amid the Hefajat grand rally being staged at the city’s Shapla Chattar following its April 6 massive showdown at the same venue. UNB