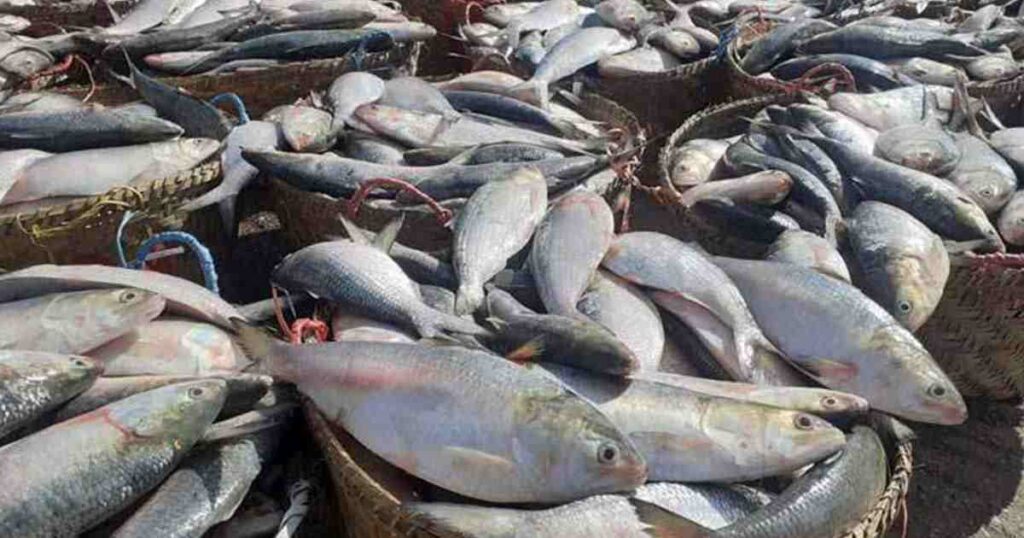 Khulna, Aug 10 – Markets of Khulna are being flooded with Hilsa fishes caught from the Bay, since the lifting of a 65-day ban on fishing in the coastal waters was lifted on July 23 The resulting glut of hilsa means the King of Fish apart from being sold in markets is also being ferried in vans in Khulna town at cheap prices.Hilsa is now being caught in shallow waters, the Andharamanik estuary, Ramnabat estuary and Old Gourango estuary near different rivers of Barishal.
Fishermen are bringing these fish from the sea to different fishing ghats of Khulna in trawlers. Some are also bringing them in trucks to the wholesale market in Khulna.
Most of the fish are coming to the KCC (Khulna City Corporation) Rupsha Wholesale Fish Market.
This year, hilsa colonies did not come to the rivers due to forming of numerous submerged chars and have returned to the sea after roaming in the estuaries.
Traders said even though less hilsa is found in the river, they are being caught in large numbers in the sea. These are slightly smaller in size.
Mehedi, a retailer in Rupsha New Market, said, “Lot of hilsas are coming in the market hence prices have also come down. The usual rate of Tk 1,200-1,300 per kg, has reduced to Tk 900-1,000 per kg.”
Abu Musa, proprietor of Madina Fish Traders in KCC Rupsha Wholesale Fish Warehouse, said more hilsa is coming to the market this year than the last and the price is also lower.
He said the price of hilsa caught in sea is Tk 300-350 per kg where each fish weighs 300-400 grams . “The price of each kg of 500 gram Hilsa is Tk 400-450 while the price of a single hilsa weighing one kg is Tk 700-800.”
On the other hand, 300-400 gram size of hilsa caught in rivers cost Tk 350-450 per kg and the price of one kg of 500 gram size is Tk 450-550.
“Each river hilsha weighing one kg costs Tk 800-900. The price of river hilsa is a bit higher as it tastes better than the sea,” Musa added.
Molayapota evening market Fish Traders’ Association President Ashek said more fish have been coming since Eid-ul-Adha. “At present most fish are from the sea and are slightly smaller in size. But fish caught in the river are also coming.”
Loads of fish are coming to markets of Khulna every day by fishing boat. Buyers are happy with the low price which will go down further. – UNB