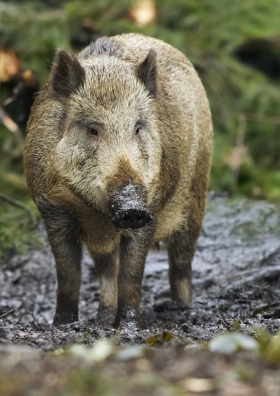 Ordinarily, invasive and exotic species are a grave threat to native wildlife: outcompeting local species, introducing parasites and disease, and disturbing local ecological regimes. A unique case in the Brazilian Pantanal, however, has turned the tables; here, an introduced mammal has actually aided the conservation of native wildlife.The impact of feral pigs (Sus scrofa) is a serious threat to biodiversity in many ecosystems around the globe. Their destructive rooting behavior and voracious appetite are often severely damaging to populations of plants and small animals, not to mention they serve as a reservoir for a host of zoonotic diseases. In the Pantanal, however, introduced feral pigs have had a positive impact on wildlife communities and the local culture.
The Pantanal region of South America, which extends beyond Brazil into Bolivia and Paraguay, is one of the largest freshwater wetlands on the planet and boasts a diversity of unique wildlife- but this hasn’t always been the case.
Previously, commercial bush meat hunting was a somber threat to biodiversity in the Pantanal. Prohibitive legislation changed that in 1967, banning commercial and recreational hunting and extinguishing the pelt and skin trade.
The introduction of feral pigs (about 200 years ago) relieved a significant amount of hunting pressure on native species, allowing populations a chance to rebound after the legislation. Pantanal denizens prefer to hunt pigs as opposed to native wildlife because they are abundant, easily accessible, and provide a substantial amount of meat and oil. Pig hunting has become an important part of Pantanal culture.
In addition to a reliable source of protein, pigs provide oil and fat which is used for cooking and curing meat. This valuable resource is important in a place where resources are limited and preserving food is vital.
Arnaud Desbiez, a wildlife biologist in the region has been studying feral pigs in the Pantanal for some time. Along with colleagues, he interviewed local hunters about their hunting practices and found that 93% of respondents preferred to hunt feral pigs as opposed to native wildlife, such as collared and white-lipped peccaries, other members of the swine family.
Local hunters are even managing the feral pig population to their advantage, capturing young male pigs, castrating them, and releasing them so that they can grow, gain weight, and be optimal hunting targets when they reach adulthood. Desbiez’s research has shown that such local hunting practices are helping to keep the feral pig population in check.
“Feral pigs are hunted on horse[back] with dogs…this means that the young are often separated from their mother and will die of hunger or through predation,” he told mongabay.com.
(Source: MONGABAY.COM via ENN)