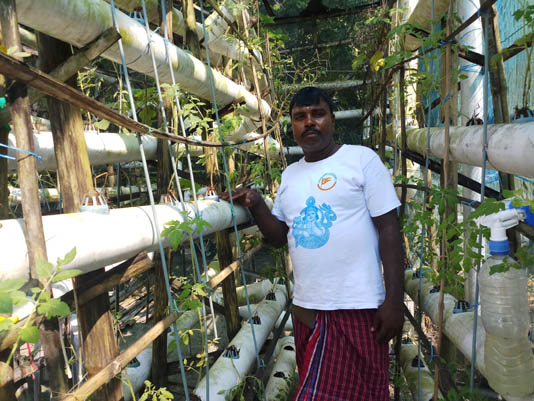 “We have already introduced the hydroponic agriculture in our locality as arable land is not adequate here to cultivate vegetables through conventional farming…salinity also affects vegetable farming here,” Ripon Kumar Mondal, chairman of Deluti Union Parishad of Paikgacha upazila in Khulna, told BSS.

He said Deluti Union Parishad is implementing a hydroponic project to encourage the local people to adopt the soilless farming method in growing vegetables.

A total of 100 women of the climate vulnerable households of Deluti Union were imparted with training on hydroponic farming under the project with support from UNDP and SIDA, Mondal said, adding 15 households have already adopted the agriculture technique on pilot basis.

“They have been farming vegetables on their homestead promises applying hydroponic method as they have no enough arable land to grow vegetables,” he said.

Under the project, Mondal said, a model hydroponic farm was set up nearby the union parishad two years ago to encourage the local people to switch to the soilless farming from the conventional agriculture.

A rainwater harvesting plant was installed near the model farm to collect freshwater. And the rainwater is being supplied to the farm through pumping in growing vegetables.

“We set up the farm two years ago and since then, we have been producing various vegetables like tomato, green chili, brinjal, cauliflower and cabbage,” said Amio Sarkar, supervisor of the farm.

Last year, he said, a huge quantity of vegetables was produced in the farm, but the local people took away those free of cost while visiting the farm.

They also regulate the frequency of supplying the nutrients to the plants. Simply, the hydroponic framers control the growing environment of the plants. The system is highly automated but still requires to be well managed.

Assistant FAO Representative Dr Nur Ahamed Khondaker said plants require 16 nutrients to grow up, while soil only helps them to stand up steadily, not helps them grow up.

There are many countries in the world where vegetables have been growing on water using hydroponic method for scarcity of arable land, he said.

“Although hydroponic farming is not commercially profitable, we have to produce food and vegetables…but the coastal people would be able to meet their household vegetable demand applying hydroponic agriculture method,” Dr Nur said.