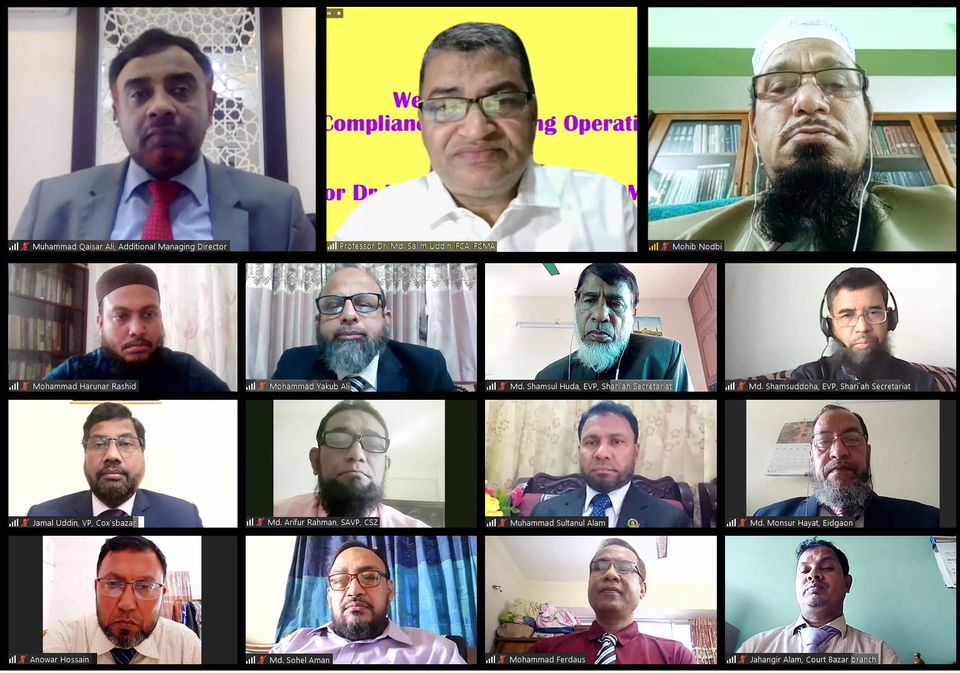 Professor Dr. Md. Salim Uddin, FCA, FCMA, Chairman, Executive Committee of the bank addressed the program as chief guest. Muhammad Qaisar Ali, Additional Managing Director of the bank addressed the program as the special guest. Mufti Mohammad Mubibbullahil Baqee, member of IBBL Shari`ah Supervisory Committee addressed the webinar as chief discussant while Mohammad Harunar Rashid, member of the committee addressed as special discussant. Mohammad Yakub Ali, Head of Chattogram South Zone presided over the program while Md. Shamsul Huda and Md. Shamsuddoha, Executive Vice Presidents addressed the program. Head of branches, executives and officials under Chattogram South Zone attended the webinar.
Professor Dr. Md. Salim Uddin, FCA, FCMA said that Islamic Banking is gaining popularity all over the globe gradually. He recalled those who have contributed to the spreading of Islamic Banking in the world, including Bangladesh. He said this banking system is a fruitful reality worldwide. Islamic Banking operates its business considering all the goals of life. By providing welfare services to all people irrespective of creed, caste or class, IBBL has been able to overcome the borders of the country and achieved global recognition.
He said that Islamic Banking is conducted through spontaneously following and complying of social norms, religious regulations, tolerance, implementation of principles, procedures and parameters of Shari`ah. He emphasized on the need to act responsibly in the compliance of Shari`ah, avoiding ceremonial and liberal compliance. He said Islami Bank conducts asset-based business. The objective of this banking system is to improve the quality of life and welfare of the people by ending exploitation from the society. Islamic Shari’ah is the source for solving all problems, he added. He said Islamic Shari’ah and Islamic Banking are essential for the humanity, better life and dignity of the people. – Press release