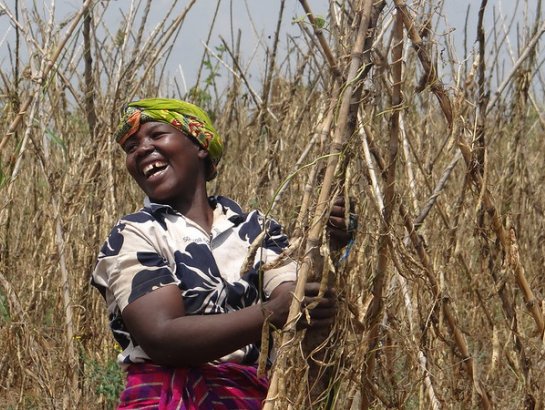 October 22, 2019 – In Rwanda, known as “the land of 1,000 hills” for its undulating terrain, people consume a lot of beans. Rwanda has one of the world’s highest per-capita rates of bean consumption and they are grown throughout the country. From this humble staple food has emerged a potent solution to micronutrient deficiency, or hidden hunger: beans biofortified with iron. Their development began in Rwanda less than a decade ago but they have already become a nutrition success story. By the end of 2018:
• 20 percent of the beans produced in Rwanda were iron bean varieties.
• 15 percent of Rwanda’s population (1.8 million out of 12.4 million) were eating them.
By biofortifying a familiar and readily available food, Rwanda has rapidly established a practical, cost-effective, and sustainable solution to iron deficiency that can stem its negative impacts on brain development, learning capacity, and overall health. Assuming recent adoption trends continue, iron beans are on track to account for 40 percent of beans produced in the east-central African country by 2025.
Diets deficient in iron are a major cause of debilitating anaemia, which affects 38 percent of children under five and 19 percent of pregnant women in Rwanda. Young children and non-pregnant, non-lactating women who consume dishes made with iron beans as a regular part of their diets can obtain up to 80 percent of their daily average iron requirement. They don’t have to eat more beans than they would otherwise—the targeted iron intake is calibrated to normal levels of bean consumption.
“Consumers like the beans; two pregnant women came back to thank me for the advice and the beans after their doctors confirmed that blood iron levels that were low had increased to normal just after adopting and consuming iron beans for about three months,” Placidie, an iron bean seller in Kigali’s Kabeza Market, said.
Studies across continents and populations have demonstrated significant positive and protective health effects from iron biofortification. In Rwanda itself, a landmark study with women of reproductive age, published in the Journal of Nutrition in 2017, showed daily consumption of iron beans addressed iron deficiency and improved memory and attention within six months. Such improvements can enable women to be more productive in work and/or as mothers. Improving iron stores before pregnancy also reduced the likelihood of premature or small babies and decreases the risk that a woman will die during childbirth.
Rwanda’s inspiring iron bean journey began in 2010 through a collaboration between the Rwanda Agriculture Board, HarvestPlus, and the International Center for Tropical Agriculture. Since then, hundreds of partners have come on board and ten iron bean varieties have been developed, released, and promoted. Several more varieties are currently in testing.
Farmers and consumers have embraced these nutritious beans: by the end of 2018, more than 420,000 farming households were growing them. To be sure, this is more than a good-nutrition story from the farmers’ perspective. They appreciate the fact that iron beans yield 17–22 percent more in volume than other types of beans grown in the country and an additional US$57–78 of profit per hectare. Other attractive agronomic properties of iron beans include virus resistance and heat and drought tolerance.
“These beans are good not only because they are disease-tolerant and have good yields, but also because they are high in iron,” Nzeyimana Alexis, a farmer from the Eastern Province, said.
Strong uptake has come about in part because of innovative iron bean marketing efforts, such as a popular song produced, promoted, and made into a video by local celebrity musicians. But the iron bean story is mostly about the hard, partner-intensive work of developing functional and sustainable seed distribution networks and farm-to-consumer value chains.
For example, HarvestPlus supported the establishment of grain aggregation centres that linked iron bean producers to markets and improved access to the product for consumers. On the seed distribution side, more than a third of iron bean seed provided to farmers went through a partnership with the agronomic training and extension service Twigire Muhinzi and community grain traders. More than 5,000 lead farmers and more than 1,000 agricultural extension workers have been trained to support smallholder farmers in cultivation, marketing, and understanding the nutritional benefits of iron beans.
Improving memory and attention can help people and economies reach their full potential. In Rwanda, the cumulative added value of iron beans during 2010–2018 is estimated to be just under $25 million—due to higher bean productivity and the approximately 5,000 disability-adjusted life years (DALY) saved1 from reduced risk of iron deficiency as a result of their iron bean consumption. By 2025, the value of benefits from iron beans to Rwanda could exceed a cumulative US$100 million.
There is strong government endorsement for biofortification. For example, Rwandan authorities recently issued standards for biofortified beans—a critical step in developing markets for iron bean-based products that few other countries have taken.
Embedded into the seed system and policies, biofortification will continue to help rural families reach their cognitive and physical potential.
In subsequent stories about iron beans in Rwanda, we will highlight examples of success stories in various parts of the value chain that helped bring all the pieces together.
1 DALYs represent the burden of disease on a population. They can be thought of as a measurement of the gap between current health status and an ideal health situation where the entire population lives to an advanced age, free of disease and disability. – HarvestPlus