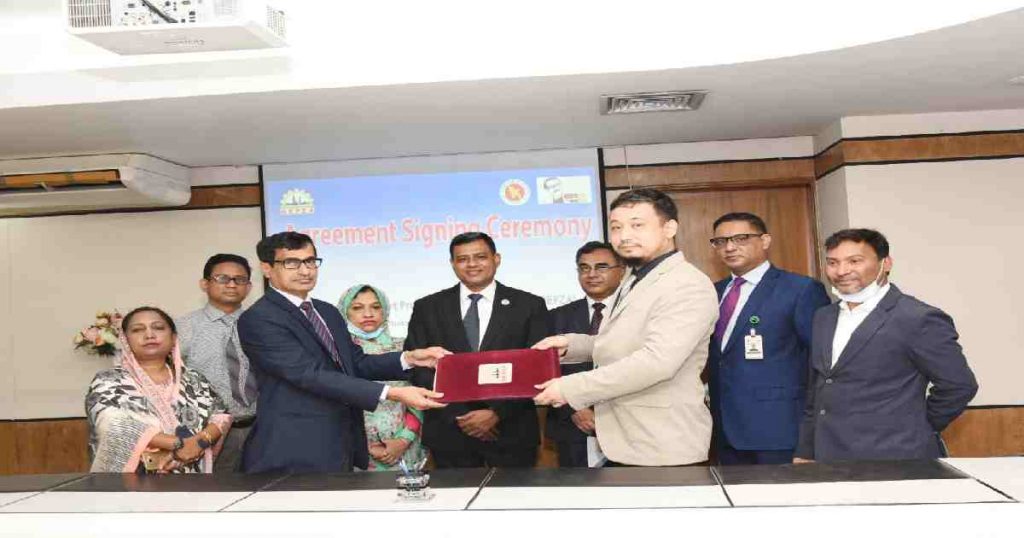 Dhaka, May 19 :  Roulin (BD) Limited, a Japanese apparel manufacturing company, is going to expand its business in Ishwardi EPZ and create employment for 3,500 Bangladeshis.The enterprise signed an agreement to this effect with BEPZA on Wednesday.
Recently, the major share of the company was taken over by Matsuoka Corporation, a major player in the wholesale sector of Japan. Now the new shareholder will expand the existing operation of Roulin (BD) by investing $25 million where 3,500 Bangladeshis will be employed.
Roulin (BD) has been operating their business in IEPZ since 2011 and invested $4.53 million.
In presence of the Executive Chairman of Bangladesh Export Processing Zones Authority Major General Md Nazrul Islam, Member (Investment Promotion) Md Mahmudul Hossain Khan for BEPZA and Representative of Matsuoka Corporation Osamu Sasaki on behalf of Roulin (BD) signed the agreement at BEPZA Complex, Dhaka.
BEPZA is trying its best to attract foreign and local investment in the EPZ even during the Covid-19 pandemic. Investment-friendly policies of the government and favourable investment atmosphere of EPZs are encouraging Japanese investors including others to invest in EPZs.
Presently, 31 Japanese enterprises have invested $525 million in the EPZs and created employment opportunity for 13,500 Bangladeshis.
Among others, Member (Engineering) Mohammad Faruque Alam, Member (Finance) Nafisa Banu, Secretary Md Zakir Hossain Chowdhury, General Manager (Public Relations) Nazma Binte Alamgir and General Manager (Investment Promotion) Md Tanvir Hossain of BEPZA including Managing Director of Roulin (BD) Md Mahbubar Rahman were present at the signing ceremony, reports UNB.