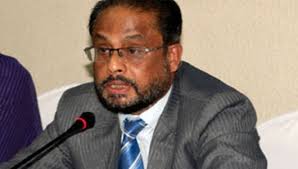 Jatiya Party Parliamentary Party on Thursday decided to join the Awami League-led Grand Alliance government to ‘contribute’ to the country’s further development under the leadership of Prime Minister Sheikh Hasina.
Party cochairman GM Quader came up with the announcement after its parliamentary party’s meeting in Parliament.“All of our MPs wanted us to join the Grand Alliance to form its government, and we also carried out our electioneering in that way,” he said.
GM Quader further said, “We didn’t think BNP’s election results would be so poor. Now we all agreed to remain in the Grand Alliance government. We would like to keep contributing to building the country and taking it forward under the leadership of Grand Alliance leader Sheikh Hasina.”
He said their party delegation will soon meet the Prime Minister to discuss the issue with her.Asked which party will be there in the Opposition if they join the government, the Jatiya Party cochairman said it is not their concern. “The way people cast their votes there is no situation for making any party the opposition.”
He said their leaders and activists worked together with Awami League to ensure the victory of the Grand Alliance and form a government together. “So, people may not accept it if we now play the role of the opposition. It’s a practical problem.”