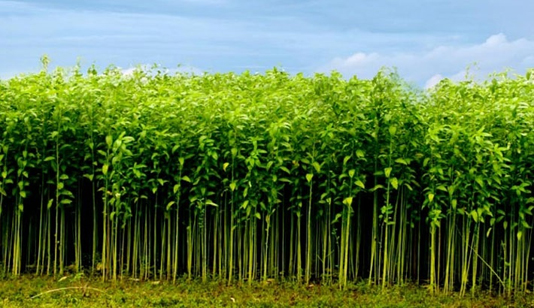 Manikganj, Aug 13:Farmers of all the seven upazilas in Manikganj district are very happy as they get bumper yield of jute this year due to favourable weather and availability of agri-inputs. Department of Agricultural Extension (DAE) sources said a total of 3,396 hectares of land have been brought under jute cultivation in all the seven upazilas of the district with a production target of 44,620 bales this year.
DAE sources said cultivation of jute is increasing every year in the district as growers are getting fair price of their product.
They said farmers cultivated jute on 862 hectares of land in Manikganj Sadar upazila, 327 hectares in Saturia upazila, 950 hectares in Singair upazila, 302 hectares in Harirampur upazila, 235 hectares in Shibalaya upazila, 308 hectares in Ghior upazila and 412 hectares in Daulatpur upazila this season.
Abdus Salam, 40, a farmer of Kangsha village under Singair upazila, said “We are interested in cultivating jute as it gives us cash during the lean period.”
Md. Hafijuddin, 52, of village Dashora under Manikganj Sadar upazila said “I cultivated jute on two bighas of land this year and I harvested all of them with good production and I am waiting to get huge profit.”
Md. Shahjahan Ali Biswas, deputy director of DAE, said the jute cultivators are interested in jute cultivation as they get good price of their products and they are getting all kinds of support from the government including quality seeds and fertilizers.