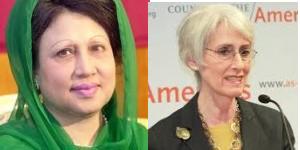 BNP on Monday claimed the tentative meeting between opposition leader and
BNP chairperson Khaleda Zia and visiting US Under Secretary for Political
Affairs Wendy R Sherman and did not take place due to schedule problem.“A meeting was supposed to be held between the opposition leader and the US
envoy. As the schedule can’t be finalised, the meeting won’t be held,” BNP
chairperson’s press secretary Maruf Kamal Khan Sohel told UNB in the
afternoon.
As his attention was drawn to media reports that Sherman cancelled the
meeting as she had to reschedule her programmes due to Sunday’s hartal,
Maruf said there is no question of cancellation of the meeting as there was
no final schedule for it.
She had a tentative schedule for meeting with the opposition leader in the
afternoon, he added.
The US envoy arrived here on Sunday amid a countywide daylong hartal
enforced by BNP-18party alliance to attend the second US-Bangladesh
Partnership Dialogue.
BNP Chairperson’s adviser ShamSher Mubin Chowdhury told the BBC last
night the cancellation of the meeting was nothing political. In a
siminar situation in 2003 a visiting US official had cancelled a
meeting of the the leader of the opposition.
The US top official is scheduled to leave Dhaka tonight. ( Source: UNB)