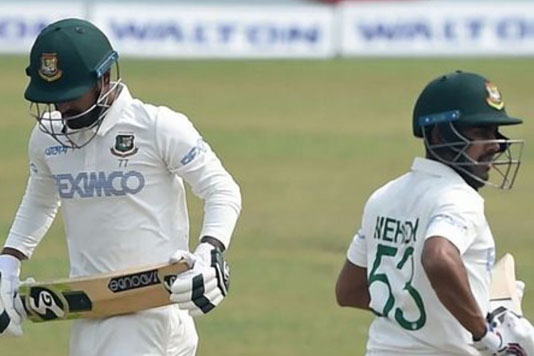 DHAKA —Liton Das hit back in form, shrugging of the poor run that haunted him in the Bangladesh’s limited over series against New Zealand, as he scored a half-century in the two-day inter-squad warm-up game.

Playing for Team Green, Liton hit 64 before being retired against Team Red as his side ended the last and final day scoring 225 in 71 overs. It was the match however where all of the batsmen were given time to bat even though some of them got out cheaply initially.

Test captain Mominul Haque, who also led the Team Green was out on 0 in the first time but later he again came to bat and scored 47. Mohammad Mithun made 28 while Shadman Islam scored 19. Shoriful Islam was not out on 20.

Team Red’s off-spinner Mehidy Hasan Miraz claimed 3-41 in a pitch which was not so conducive to the bowlers. Fast bowler Abu Jayed Rahi and left-arm spinner Taijul Islam grabbed one wicket apiece.

On day one, Tamim Iqbal led Team Red and scored 314-1 with the captain himself leading the way, with 63 before being retired. Saif Hassan scored 53 while Nazmul Hossain Shanto chipped-in-with 52 before both of them retired. Nurul Hasan Sohan contributed 48.

It was Tigers only practice game in Sri Lanka after they stayed for a three-day room quarantine upon their arrival here on April 12.

Bangladesh will now train on April 19 and 20 before taking on Sri Lanka for the first Test on April 21. The second and final Test starts on April 29. Both the two matches will be held in Pallekele International Cricket Stadium in Kandy. The final squad for the two-match Test series will be announced very soon.