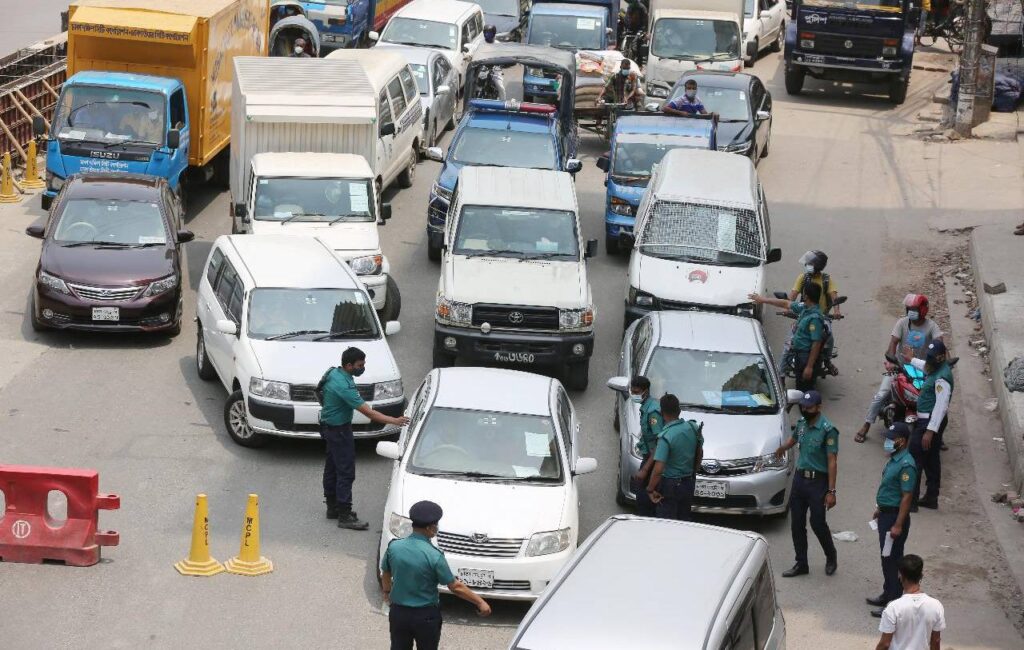 Dhaka, Apr 22 : The movement of private vehicles has increased significantly over the last few days even with the government extending the ongoing lockdown for another week to counter the rising Covid-19 cases.People who have obtained their movement passes are allowed to commute in their vehicles while those in essential services are exempted from the restrictions, as per the directives of the Directorate General of Health Services (DGHS).
On Thursday, rickshaws, which provide last-mile connectivity to the residents, were, however, seen plying on many roads in the capital, including Mirpur Road, Banani and Mohakhali areas.
The garment workers have been allowed to join their workplaces as the government has kept the export-oriented industries open during the lockdown.
Shops and shopping malls, however, remained closed as the government has enforced a stricter lockdown to stem the spread of Covid-19 cases.
Police and RAB members were seen monitoring the movement of vehicles and people after setting up check-posts in different areas of the capital.
Asaduzzaman, a traffic Inspector, said, “The movement of private vehicles and rickshaws have increased in the last few days but we are allowing only those who movement passes to commute.”
“Those in emergency services are allowed to move freely,” he addedm
A surge in coronavirus cases prompted the government to go for an eight-day complete lockdown from April 14. The cabinet division issued a notification in this regard on April 12.
Later, following the shattering situation of Covid-19 cases, the government extended the ongoing lockdown by another week from April 22 in an effort to bring the situation under control.
A circular was issued on April 20 extending the ongoing strict lockdown for another week from April 22, aiming to curb the transmission of Covid-19.
The operations of international special flights and banking activities will continue while other restrictions will remain in force till 28 April midnight.
“The lockdown will remain in force from April 22 to 28 with the same restrictions imposed in the previous week. It’ll be a tougher one,” State Minister for Public Administration Farhad Hossain said on April 19.
As coronavirus cases continued to rise alarmingly since mid-March, the government imposed an apparently loose nationwide lockdown for one week from April 5 as part of its move to contain its spread. Later a stricter lockdown was declared from April 14 to 21.

Covid-19 situation
Bangladesh registered 95 more Covid-related deaths in 24 hours till Wednesday that pushed up the total number of fatalities to 10,683.
Besides, 4,280 people were found infected during the period after testing of 28,408 samples, the Directorate General of Health Services said in a handout.
On April 19, the country broke all the previous records of Covid-19 deaths registering 112 fatalities.
Bangladesh reported its first coronavirus cases on March 8 last year and the first death on the 18th of that month.
Health authorities have so far confirmed 732,060 cases. Among them, 635,183 people — 86.77 percent of all patients — have recovered.