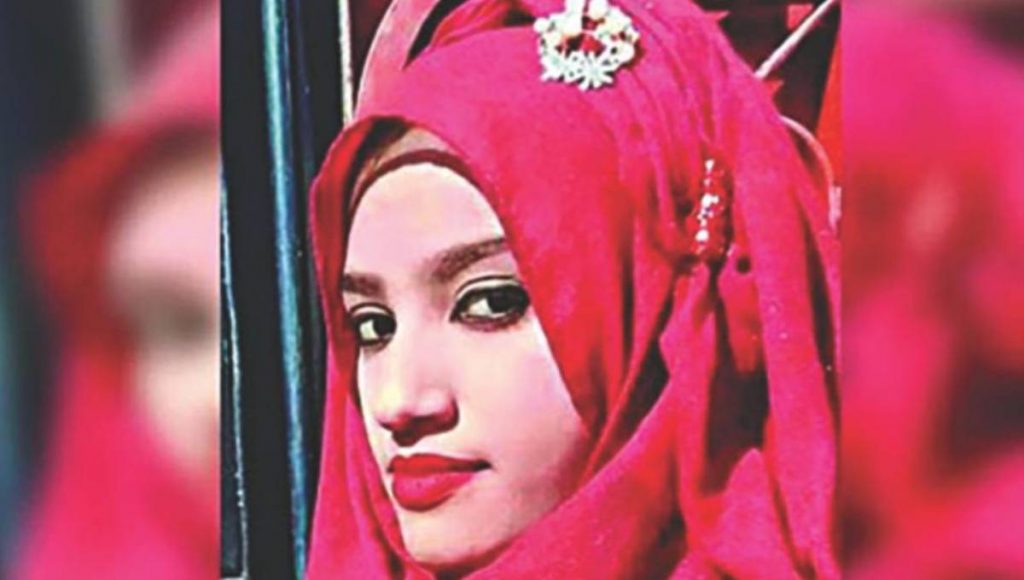 Feni, Oct 24 – A tribunal on Thursday sentenced 16 people to death for their roles in killing madrasa student Nusrat Jahan Rafi. District Women and Children Repression Prevention Tribunal Judge Mamunur Rashid handed down the verdict.
The convicts are – madrasa principal SM Sirajuddoula, Awami League leader Ruhul Amin, Shahadat Hossain Shamim, Nur Uddin, Imran Hossain Mamun, Hafez Abdul Quader, Iftekhar Uddin Rana, Councillor Maksud Alam alias Moksud, Kamrunnahar Moni, Saifur Rahman Mohammad Zobair, Javed, Umme Sultana Popy, Mohiuddin Shakil, Mohammad Shamim, Abdur Rahim Sharif and Absar Uddin.
The Tribunal also fined them Tk 1 lakh each.
Nusrat was set on fire on April 6 on the roof of a madrasa she attended, allegedly by people loyal to Sirajuddoula whom she had accused of sexually harassing her.
She succumbed to her injuries four days later at Dhaka Medical College Hospital.
A case was filed at Sonagazi Police Station on April 8. Police pressed charges in court against 16 people on May 29.
Twelve of the accused reportedly confessed to their involvement in the killing of Nusrat, a student of Sonagazi Islamia Madrasa.
On May 10, Moazzem Hossain, the then officer-in-charge of Sonagazi Model Police Station, was suspended in connection with the murder.
He was accused of unlawfully interrogating Nusrat and recording it on phone. A video of the interrogation went viral on the social media, prompting a lawyer to file a case against him on April 15 under the Digital Security Act. – UNB