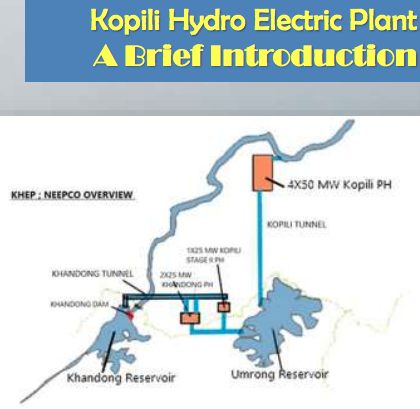 October 8, 2019 SANDRP
The 275 MW Kopili Dam Power House of NEEPCO (North Eastern Electric Power Corporation Limited, an Indian Union Ministry of Power Underaking) in Assam suffered major disaster on Oct 7, 2019. The penstock pipe that takes water from the Umrangso dam to the hydropower house burst during early hours in Assam’s Dima Hasao (earlier called North Cachar Hill) district, and massive quantity of water erupted, a lot of it entered the power house, where four employees of NEEPCO are feared to have been trapped/ washed away. A large portion of the Kopili Hydro Electric Plant was also inundated and a temporary bridge was also washed away. Some videos of the situation are also available.
Even as the world remembers one of the worst dam disasters that happened on Oct 9, 1963, at Vajont dam in Italy, killing at least 2000 people, we have another dam related disaster in India.
Unfortunately, there is no information either from NEEPCO or Union Power Ministry or any other agency of Union Govt or Assam Disaster Management Authority about this disaster so far, so we have to depend on media reports.
The media reports say: “… a burst in a water tunnel at Umrangso early Monday morning (around 0630 am) that also led to massive flooding at the power project site and in other parts of the town… the water tunnel that carries water at 12000 litres/sec from the NEEPCO reservoir to the Kopili Hydro Power Project site led to massive flooding and a water fountain that rose up to several hundred feet into the sky. People said they heard a deafening sound and then saw the water sprout… The water tunnel that cracked was incidentally repaired last year”.
Another news report: “The NEEPCO authorities have sought help from the National Disaster Response Force (NDRF) and the Assam Rifles to deal with the situation. “The heavy force of the water flooded the entire area including the power house, triggering the crisis” Hemanta Deka, NEEPCO executive director (Operations and Management)” said.
After the incident, NEEPCO sent a letter to officials of seven districts downstream in Meghlaya and Assam Monday informing them about the damage to penstock (pipeline) of the Umrong reservoir (one of the two of the project) and said that as a safety measure to control the flow of water all gates of the reservoir are being opened.
The Kopili Hydro Electric Project (HEP) has two dams, one on the Kopili River and one on its tributary Umrang stream. This project was developed by NEEPCO (Northeast Electric Power Corporation Ltd.). The first dam with 66 m height on the Kopli River is known as Khndong dam and the second one with 30 m height is known as Kopili dam located at Umrangso. Water from the Khandong reservoir is utilised in the Khandong power station through a 2852 m long tunnel to generate 50 MW (2 X 25 MW) of power. The tail water from this powerhouse is led to the Umrong reservoir. The water from Umrong reservoir is taken through a 5473 m long tunnel to the Kopili power station to generate 200 MW (4 X 50 MW) of power [Its possibly this tunnel that burst on Oct 7, 2019, leading to the disaster]. An additional 25 MW was added to the Khandong dam in the Stage two of the Kopili HEP, making the total power generation 275 MW. Both Khandong and Kopili dams are concrete gravity dams. The work on the project started in 1976, the first unit of this Kopili HEP was commissioned in March 1984. Additional unit under stage two was commissioned in July, 2004.
The Kopili is a south bank tributary of Brahmaputra which originates in the Borail range mountains in Meghalaya at an altitude of about 1600 m and has a total length of 290 km up to its confluence with Brahmaputra. Its basin is bound by the Jaintia Hills in the west and the South Cachar and Mikir Hills in the east. Kharkor, Myntriang, Dinar, Longsom, Amring, Umrong, Longku and Langkri are its major tributaries in its upper reaches. – Courtesy – Sandrp
Major disaster at Kopili Dam of NEEPCO in Assam