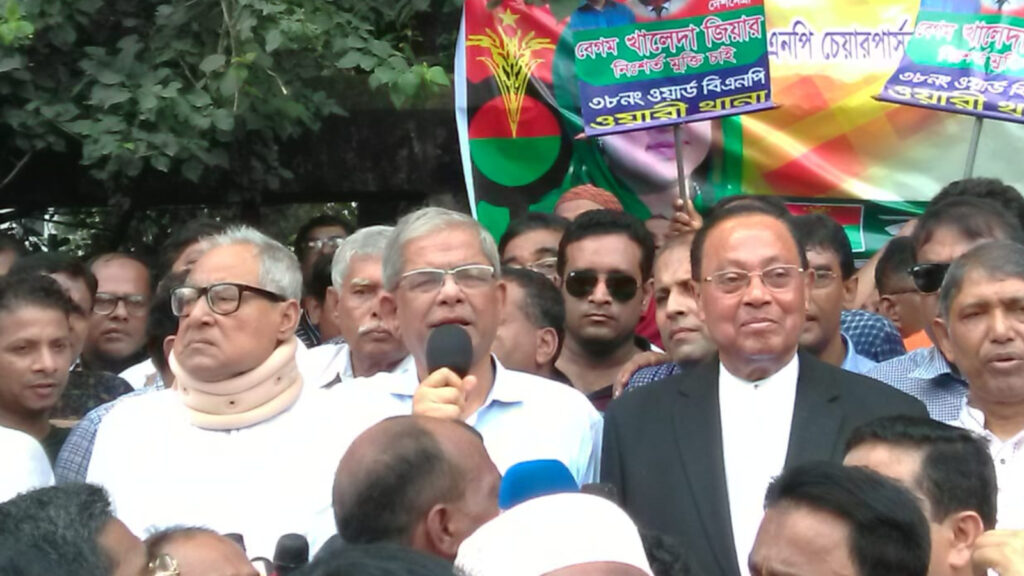 Claiming that the government has bogged into corruption, BNP senior leader Moudud Ahmed on Saturday demanded the ministers and ruling party MPs make their wealth statements public.“Corruption has spread to every organ of the government. We want to see the wealth statements of all the ministers and MPs. The statements must be presented before people,” he said.
Speaking at a human-chain programme here, the BNP leader also said it is necessary to know how much wealth the ministers and former ministers have so far amassed and how much wealth they had before assuming office.
“If they don’t accept our demand, we’ll understand the allegation of corruption can be brought against all the ministers and MPs of the current parliament,” he said.
Jatiyatabadi Swechchasebak Dal arranged the programme in front of the Jatiya Press Club, demanding the release of BNP Chairperson Khaleda Zia.
Justifying his demand, Moudud, a BNP standing committee member, said a recent global report said Bangladesh is the number one country where it is easy to become the rich very quickly.
“This means those who are indulging in gambling, casino business, and making imports in favour of the government through over-invoicing and earning black money are getting richer. The banking system has now collapsed. That’s why we’re making the demand (for submission of wealth statements),” he added.
The BNP leader said the current drive of the government against the casino business and wrongdoers will not be successful as long as the MPs and ruling party influential leaders who are behind the misdeeds are tracked down.
He also said the government will not be able to eliminate corruption as it has plunged into graft. “So, they should step down immediately and take steps for holding a credible election under a non-party neutral administration creating a scope for people to establish a true representative government.”
Moudud said the country’s people have lost their confidence in the government due to its ‘misrule and corruption’. “The government will collapse due to its widespread corruption.”
He alleged that their party chief Khaleda Zia has been in jail for nearly 17 months in ‘false cases, and she is not getting bail due to the government’s influence on the court.
The BNP leader said they will continue to put in their efforts to free Khaleda through the legal process. “But it won’t be enough as the street movement is the only path to have her released from jail.”
He called upon BNP leaders and activists to get ready to take to the streets as their party will come up with action programmes in the coming days to force the government free Khaleda.
BNP vice chairman Abdullah Al Noman, joint secretary general Habib-un-Nabi Khan Sohel, Swechchasebak Dal president Shafiul Bari Babu and general secretary Abdul Quader Bhuiyan Jewel, among others, spoke at the programme, reports UNB.