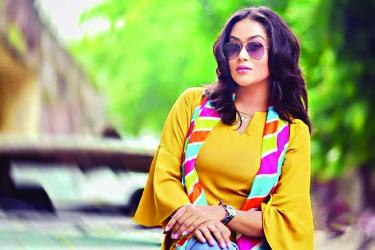 Entertainment Desk
Popular actress Zakia Bari Mamo received the prestigious National Film Award as the best actress for her amazing portrayal in her maiden film ‘Daruchini Dwip’ directed by actor-director Tauquir Ahmed.Mamo always respects to Tauquir Ahmed for this reason. Now she is a matured actress who always wants to work in challenging roles. ‘Daruchini Dwip’ was her milestone work, she stepped into the showbiz industry about 13 years ago.
On the occasion of upcoming Eid, Mamo acted in a drama titled ‘Swarnalata’ under Tauquir Ahmed’s direction. Noted actress Bipasha Hayat wrote the story of the play. Mamo acted against Tauquir in the drama. Recently shooting of the play was done at Rajendrapur, adjacent to Dhaka.
While talking about acting in ‘Swarnalata’ Mamo said, “As an actress, my recognition in acting at the national level to act in Tauquir Bhai’s work. For this reason, I have always respected him. Tauquir Bhai is at a time a talented actor, play and film director. ‘Daruchini Dwip’ was my milestone work.
While working with him I recalled memories of 12 years ago. During break time in shooting, we recalled those memories. Therefore, Bipasha Apa is a noted actress who is also favourite to me. I always miss her acting. Her writing is always special to me. I believe viewers will enjoy the play ‘Swarnalata’ on Eid.”
Mamo also informed that ‘Swarnalata’ will be aired on RTV in Eid-ul-Azha. Now Mamo is trying to act in exceptional story-based works. She wants to establish herself as a ‘class actress.’ She has already finished shooting of Sumon Anwar’s drama titled ‘Nilmaya’. She is also hopeful about this play.