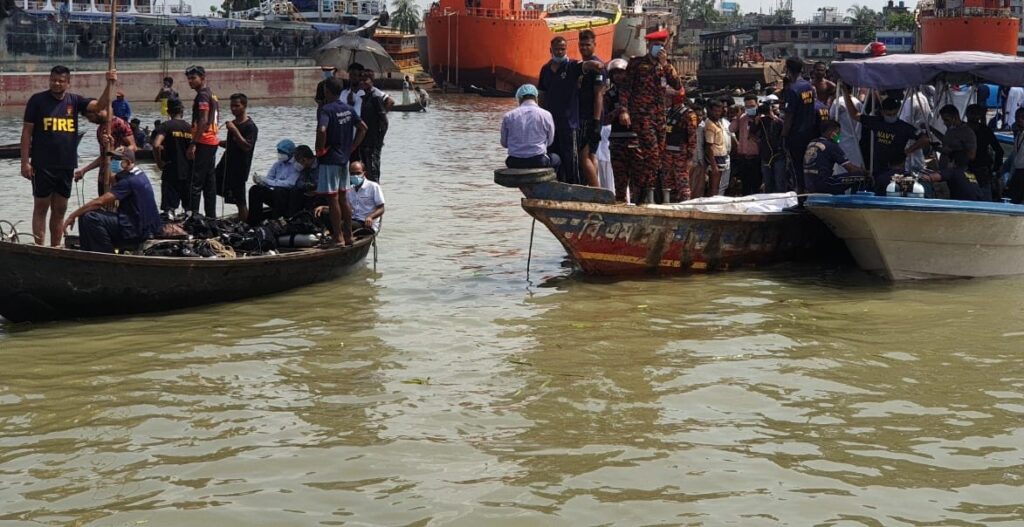 Dhaka, June 30 – Divers on Monday night rescued a man who survived in the water for nearly 13 hours after a launch-capsize incident on Buriganga River in the morning.“Sumon Bepari, 55, of Abdullapur area under Tongibari thana in Munshiganj, was rescued at around 10:30 pm from Buriganga River,” said Syed Kamrul Hasan, duty officer of the control room at Fire Service and Civil Defence headquarters.
Sumon is believed to have survived by breathing at an air pocket inside the sunken launch. He responds to queries with gestures using hands and face and does not talk, divers said. He was immediately taken to Sir Salimullah Medical College Mitford Hospital, he added.
A diver involved in the rescue told reporters at the site that “The whole body of Sumon Bepari turned white.”
Sumon, a fruit trader, came to purchase fruits from Badamtali market.
Mitford Hospital doctor said Sumon is doing well.
The Dhaka-bound ‘MV Morning Bird’ launch from Munshiganj sank at 9:33 am in the river after being hit by another launch ‘Mayur-2’ near Shyambazar in the capital’s old town.
The death toll from the launch-capsize climbed to 32 until the evening.
President Abdul Hamid and Prime Minister Sheikh Hasina expressed profound shock at the loss of lives in the tragic incident.- UNB