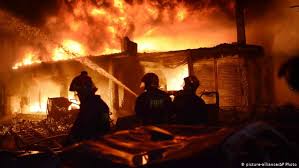 Gazipur, Feb 11 (UNB):  A massive fire broke out at a chemical factory in Gazipur’s Sreepur Upazila on Thursday.
Seven firefighting units are working to contain the blaze at Tepirbari village under Telihati union.
The cause of the fire and the extent of damage could not be known yet.
The fire erupted around 4:30pm, fire service officials said.
A loud explosion and a huge column of smoke belching out of the factory triggered panic among the locals.
Sreepur Fire Service and Civil Defence’s Station Officer Mia Raja said two of their units initially went to the scene. Later, more firefighting units from Mymensingh and Joydebpur joined them.
Although fire service officials say there has been no report of casualties, various sources claimed that at least 15 people have been injured in the blast and fire.