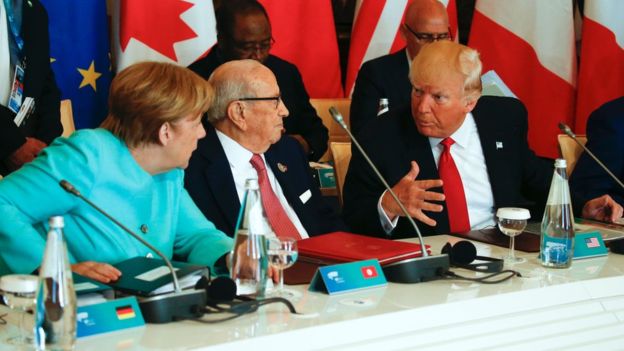 By Tharanga Yakupitiyage
UN, Jun 1 (IPS) – The United States is expected to withdraw from the landmark Paris climate agreement, prompting mixed reactions from civil society and political representatives.Despite facing global pressure to remain, U.S. President Donald Trump is expected to announce the country’s exit from the Paris climate agreement which nearly every country committed to in 2015 in order to curb global greenhouse gas emissions.
Though it is uncertain what the U.S. exit will look like, the decision has already sparked widespread disappointment and outrage.
Amnesty International USA’s Executive Director Margaret Huang called the expected decision an “assault on a range of human rights.”
“By refusing to join other nations in taking necessary steps to drastically reduce greenhouse gas emissions and mitigate climate change, the President is effectively saying: ‘Let them drown, burn, and starve,’” she continued.
Sierra Club’s Executive Director Michael Brune echoed similar sentiments, stating: “Donald Trump has made a historic mistake which our grandchildren will look back on with stunned dismay at how a world leader could be so divorced from reality and morality.”
Greenhouse gas (GHG) emissions have increased significantly in recent years from 317 parts per million in 1960 to more than 400 parts per million in 2016, levels that have not been observed for over 10 million years. This has lead to a rise in global average temperature of over 0.9 degrees Celsius (1.6 degrees Fahrenheit) above its 1960 level, and it is only projected to increase further without curbing fossil fuel use and thus emissions.
Climate change is already contributing to extreme environmental events including rapidly melting ice caps, more frequent and devastating storms, and prolonged droughts which have and will continue to impact hundreds of millions of peoples’ human rights around the world, Huang noted.
On previous occasions, President Trump has described climate change as a “hoax” created by China and has vowed to invest in domestic coal and oil, industries that have largely contributed to increased greenhouse gas emissions.
Brune noted that the decision is a betrayal of the public and market, stating: “This is a decision that will cede America’s role internationally to nations like China and India, which will benefit handsomely from embracing the booming clean energy economy while Trump seeks to drive our country back into the 19th century.”
According to the Sierra Club, the number of clean energy jobs already outnumbers all fossil fuel jobs in the U.S. by more than 2.5 to 1, and coal and gas jobs by 5 to 1. This shift to renewable energy is only expected to grow globally, reflecting the transition of the world’s energy sector into cleaner technologies. China alone aims to increase its renewable energy by 40 percent by 2020.
The majority of Americans also back the Paris agreement. A recent poll by the Chicago Council on Global Affairs found 71 percent support of U.S. participation in the deal from both Republicans and Democrats alike.
Prior to the U.S.’ decision, U.N. Secretary-General Antonio Guterres said that it was “absolutely essential” that the world implements the Paris agreement but action can still continue if a country doesn’t do so.
“But if any government doubts the global will and need for this accord, that is reason for all others to unite even stronger and stay the course,” he said in a speech at the New York University Stern School of Business.
In a similar vein, Seychelles’ Permanent Representative to the UN Ronald Jumeau said countries will move forward with climate action with or without the U.S.
“The absence of the USA does not make the glass half empty or half full. It is still more full than empty,” he said.
“What you have to worry about is look at who is here, who is sitting in the front row, and say now what are we going to do about this? How are we going to step up so that it brings benefits to us all,” Jumeau continued.
Countries in the G7, European Union, and Asia have already stepped up to reaffirm their commitments to the Paris agreement in response to the U.S.’ wavering stance.
An upcoming EU-China Summit in Brussels is expected to result in a detailed action plan to limit global warming to below 2 degrees Celsius (3.6 Fahrenheit) as laid out in the climate deal.
“Small Island States cannot afford to be dismayed or feel down about any of this, we have to move on for the sake of our countries [and] for humanity in general and for all countries,” Juneau concluded.
Nearly 150 countries have ratified the Paris climate agreement, representing over 80 percent of global emissions. Nicaragua and Syria are among the only countries that have not signed the agreement.