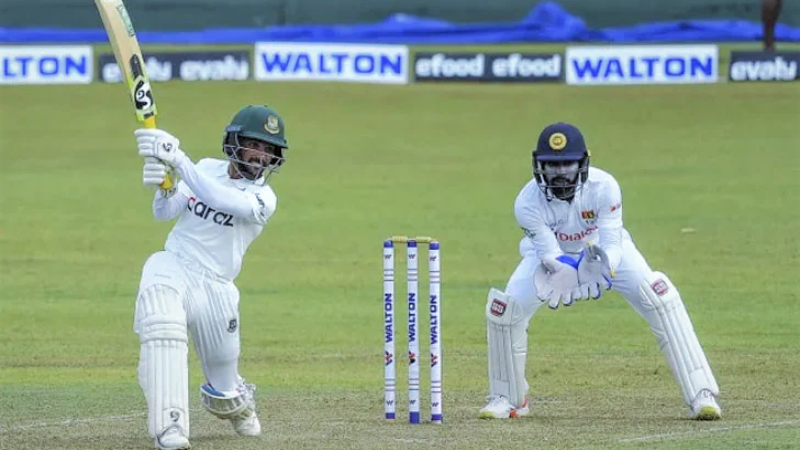 Dhaka – Bangladesh Test captain Mominul Haque hit his maiden test ton away from home in the ongoing Test against Sri Lanka in Kandy on Thursday.

At the lunch break of day two, Bangladesh were batting at 378 for two, with Najmul Hossain Shanto and Mominul were unbeaten for 155 and 107 respectively.

Mominul needed to face 224 to record his first century in an overseas Test. Right after his ton, Najmul, who was unbeaten for 126 at the end of day one, stretched his first Test ton to 150. Najmul was dropped at 28 by the wicketkeeper of the hosts on day one.

Bangladesh ended day one at 302 for two. They added 76 runs in the first session of day two and both the overnight batsmen are still impregnable by the hosts’ bowlers.

The third-wicket partnership between Najmul and Mominul reached 226 runs so far, which is now the fourth highest stand by a Bangladeshi pair in away Tests.

Mominul played 42 Tests before coming to this game and got stuck 10 centuries. But all of those centuries have been notched up on home soil. Before this game, his best in away Tests was 77, which is now surpassed by the left-handed batsman.

Earlier, on day one, Bangladesh won the toss and opted to bat first. They lost the opener, Saif Hassan, in the second over of the match. But the visitors recovered from that initial damage well, as Tamim Iqbal and Najmul put up a 144-run partnership in the second wicket stand.

This series is part of the World Test Championship. Bangladesh played five matches of this event but failed to win any of them while Sri Lanka played 10 matches and won one with losing six and drawing the other three.

Bangladesh played a total of 12 matches in Sri Lanka and won one of them in 2017 which was Bangladesh’s last overseas Test win to the date.UNB