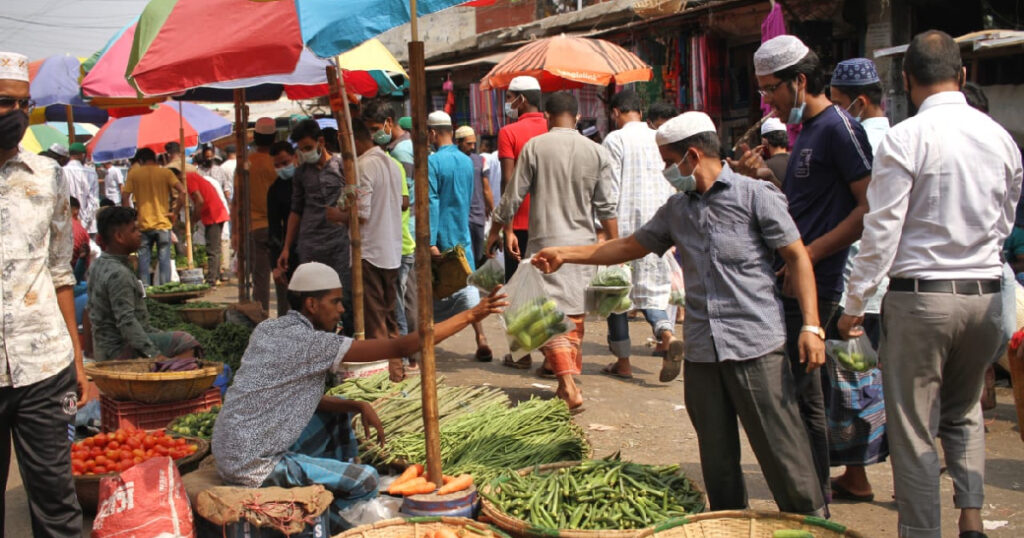 Dhaka, Apr 22 : Bangladesh is unlikely to see any improvement in the Covid-19 situation before June next as the country is still in the grip of its second wave, predicted a group of local and international health experts.Using a mathematical model, Bangladesh Como Modelling Group, a group of experts from both Bangladesh and Oxford University, also projected that the country will witness the similar infection rate intermittently till the end of May while the situation may improve in June.
However, some local experts think the virus is yet to reach its peak as it is spreading fast in newer areas alarmingly since many people had returned to their village homes from corona hotspots before the government enforced the lockdown.
Talking to UNB, Dr Abu Jamil Faisel, a member of Bangladesh Como modelling group, said: “We’ve a projection that the current uptrend in Covid deaths and cases will continue erratically until the end of May. The situation may improve in June.”
He said they think the country is going through the peak of the fresh wave of the virus. “As per our projection, there’ll be a month of plateau and the country will witness the similar infection rate for two more weeks and then it’ll start flattening.”
Faisel said they projected that the infection rate will not substantially fall till the end of May. “But we couldn’t clearly project the death rate as it often fluctuates, and it depends on hospital management and some other factors. But it’s my personal assumption that the total death toll may surpass 12,000 at the end of May month.”
He said they shared their projection with the government. “We’re going to update the projection as we’re working on it.”
Dr Faisesl, also a member of the public health expert team for the eight divisions formed by the government, said they recommended taking a coordinated and effective plan to break the cycle of the corona transmission.
“Cent percent mask use must be ensured and the number of the daily tests must be increased so that the positive cases can be detected fast for putting them in isolation. We also need to focus on contact tracing,” Dr Faisesl said.
Besides, he said, they suggested setting up field hospitals for ensuring better patient management at the initial stage of infection. “There should be dedicated ambulances for carrying Covid patients to hospitals.”
Strengthening preventive measures
Meerjady Sabrina Flora, additional director general of the health directorate, said the peak of the virus depends on some factors. “If we can strictly maintain the preventive measures we’ve taken now, then we can expect to see a gradual fall in virus infection rate.”
She said the number of deaths is high but not the virus death rate. “As the infection number has creased, the number of deaths has also soared.”
Flora said the Coronavirus death rate was 1.53 before the fresh wave of the virus, but this has now come down to 1.43. “That means the number of deaths increased due to the rise in the number of infections.”
She said there is no alternative to controlling the transmission of the virus to lower the number of deaths. “We must strengthen our preventive measures to check the virus infections.”

Public health expert MH Chowdhury (Lenin), chairman of the medicine department at the Health and Hope Hospital, said many Covid infected people go undetected and they are infecting people around them as the number of daily tests has declined sharply.
“When the number of the daily tests was 33,000, the cases were over 7,000. Now the cases have come down to 40,000 as the number of tests has gone below 25,000. The virus has continued to surge, but we can’t identify the infected people for lack of adequate tests,” he said.
Dr Lenin said identifying the Covid patients quickly is very crucial to contain the virus transmission. “If we can detect the Covid patients promptly and keep them in isolation, they won’t be able to transmit the virus. So, we should focus on enhancing the number of daily Covid tests.”
Unlike Faisel, he thinks the virus still did not reach its peak in the country. “We’ll get an idea about its peak at the end of this month.”
Prof Dr Muzaherul Huq, former regional adviser of World Health Organization, South East Asia Region, said early diagnosis and treatment are necessary to beat the virus. “It’s difficult to save patients when they’re sent to ICU or put on a ventilator with serious infections.”
Before enforcing the lockdown, he said many people went to their village homes from different virus-hit areas in many ways and they are now spreading the virus in their localities.
Dr Muzaherul said those who have died recently were infected before the lockdown had been enforced.
Reasons behind higher fatalities
Dr Lenin said the number of deaths is higher this time than last year’s as the variants now spreading are very aggressive and fatal.
He said the condition of some people affected with the South African Covid strain deteriorates fast with the fall in oxygen level. “If the infected people are not given oxygen in due time, their condition turns critical fast.”
Besides, the expert said, some people take time to undergo tests after getting infected with the virus, but the South African variant is so dangerous that it can reach the lungs within five days of infection.
He said many people initially do not go to doctors until their condition seriously worsens while many hospitals are facing oxygen supply crunch.
Besides, around 80 percent of those who died recently of the virus were above the age of 50. “People over 50 years suffer from different comorbidities with the weak immune system. “So, we should be very careful about the treatment when the elderly people get infected with the virus.”
Lenin also observes that the medicines, including injections, that were found effective against the old variants last year are not working properly against the new strains. “These’re the major reasons why the number of deaths has spiked.”

What can contain virus deaths?
Dr Lenin said people should maintain the health safety rules, wear masks and go under test whenever they suspect the infection of the virus to check the surge in Covid deaths. “After testing positive for the virus, the patients should consult any doctor and follow the advice. “If a doctor advises anyone to go to a hospital, he or she should not make any delay to do so.”
He said the government should take steps for ensuring adequate oxygen supply and the necessary equipment to the hospitals. “Field hospitals or oxygen support centres can be set up so that people can go there for oxygen support.”
As hospitals cannot accommodate all the patients, mobile medical teams should be formed to give health care support to the patients who are taking treatment staying at homes, reports UNB.