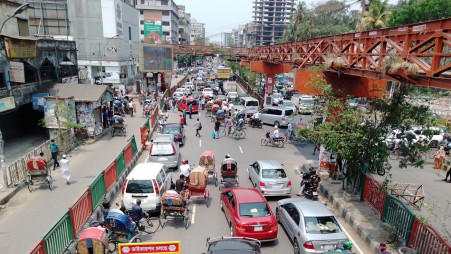 Despite an alarming spike in Covid-19 deaths in Bangladesh, people continue to defy restrictions on movement as a higher number of people and vehicles were seen on the streets in Dhaka on the 5th day of lockdown enforced by the government from April 14 to contain the spread of the virus.
No public transport is available on the roads but the number of private vehicles, rickshaws and auto-rickshaws are higher than the previous days as garment factories, banks and organizations providing emergency services resume operations after weekly holidays.
Rickshaws are dominating the roads as the movement of people has increased remarkably.
Police are seen checking people’s movement pass at different points and allowing those to go who have valid reasons for going out.
Members of the law enforcement agencies are seen putting up barricades at different parts of the capital for checking people with body-worn camera uniforms which can record any untoward incident.
Meanwhile, pressure of vehicles was seen on Uttara-Banani-Mohakhali road where in some places police were seen controlling traffic which was absent in the last four days.
Joint Commissioner Traffic (North) of Dhaka Metropolitan Police (DMP) Abu Raihan MD Saleh said, “Movement of public transport remained suspended and the law enforcing agencies are continuing regular activities at check-posts. People are seen passing with movement pass.In some cases, people have been facing fines or cases while failing to show any valid reason for leaving home.”
Though shopping malls and shops on main roads remained closed, some grocery stores in residential areas were allowed to operate for a few hours in the morning to enable people to buy their daily essentials.
A surge in coronavirus cases prompted the government to go for a 8-day complete lockdown from April 14. On Saturday the country recorded 101 deaths for the second consecutive day and 3473 new cases.
The complete lockdown will continue till April 21 midnight.