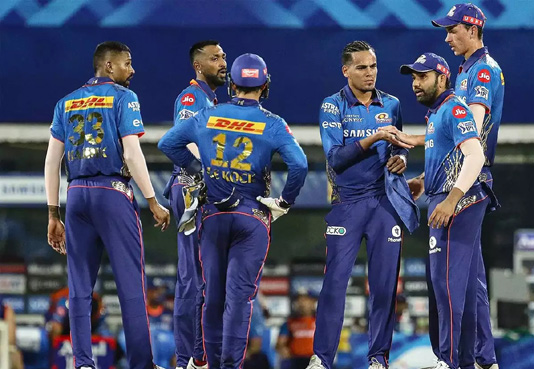 Mumbai, who lost their opener last week, defended a modest total of 152 and then kept Kolkata to just 142 for seven to seal the win in Chennai.

Kolkata seemed to be cruising at 122-3 in the 15th over but Nitish Rana’s departure after his 47-ball 57 triggered a Mumbai fightback.

“I knew if anybody could change the game here, it would be a spinner,” said man of the match Chahar.

Left-arm spinner Krunal Pandya also stood out with the key wicket of Shakib Al Hasan, for nine, and gave away just 13 runs from his fours overs.

“Anyone who came to bowl at different stages wanted to put their hands up and do something for the team,” Sharma said after the victory.

“We can take a lot of confidence from this game. There were lots of positives.”

Kolkata’s fall came after a 72-run opening stand between Rana, who had scored 80 in his team’s opening win on Sunday, and Shubman Gill, who made 33.

The rest of the Kolkata batsmen failed to make it into double digits, prompting the team’s Bollywood actor owner Shah Rukh Khan to apologise to his fans.

“Disappointing performance. to say the least @KKRiders apologies to all the fans!” he wrote on Twitter.

Russell made an impact after being brought on to bowl in the 18th over of the Mumbai innings and struck twice including the key wicket of fellow West Indian Kieron Pollard for five.

He then got three wickets in four deliveries of the 20th over to dismiss Mumbai on the final ball.