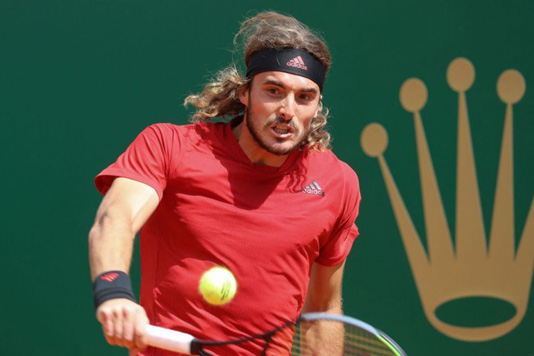 MONACO – Stefanos Tsitsipas made a winning start to the Monte Carlo Masters on Tuesday after the world number five cruised past Aslan Karatsev 6-3, 6-4 and into the last 16.

Greek Tsitsipas, who had been given a bye into the second round, took just one hour and 24 minutes to beat 29th-ranked Russian Karatsev.

The 22-year-old exploited a whopping 32 unforced errors from Karatsev to set up a clash with either Australian John Millman or Chile’s Cristian Garin.

Novak Djokovic meanwhile will face Jannik Sinner in his second round match after the up-and-coming Italian saw off Spain’s Albert Ramos-Vinolas in straight sets 6-3, 6-4.

Teenager Sinner has risen to 22nd in the world rankings after reaching the final of the Miami Open earlier this month.

“I will definitely have a game plan,” Sinner said of what will be his first meeting with Djokovic.

“I know who is on the other side. Obviously it’s a tough match I think from my side, because I don’t know him that well. I have seen him a lot on TV, watching matches. But when you play against him in a match, it’s different. I’m looking forward to that match.”

Sinner, one of five Italians to reach the second round Tuesday in Monte Carlo, is 15-5 this year but is competing in the main draw of a Masters 1000 event for just the fourth time.

Earlier on Tuesday, Daniil Medvedev pulled out of the tournament after testing positive for Covid-19.

World number two Medvedev tested positive on Monday having practised with Rafael Nadal the day before.

Organisers, contacted by AFP, declined to comment on whether third seed Nadal risked being identified as a ‘close contact’ of Medvedev and forced to quarantine.

Nadal is seeded to meet Djokovic in the final as he chases a 12th triumph in Monte Carlo, a key clay court tournament in the run up to the French Open.BSS/AFP