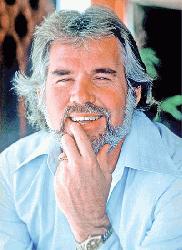 American country music legend Kenny Rogers has died aged 81.A family representative said he “passed away peacefully at home from natural causes”.
Rogers topped pop and country charts during the 1970s and 1980s, and won three Grammy awards.
Known for his husky voice and ballads including The Gambler, Lucille and Coward Of The County, his career spanned more than six decades.
He once summed up his popularity by explaining that he believed his songs “say what every man wants to say and that every woman wants to hear”.
After growing up in poverty on a federal housing estate in Houston, Texas, Rogers began recording with a string of bands, including Kenny Rogers and the First Edition, before launching his solo career in 1976.
He was never a favourite of music critics, but became one of the most successful pop-country crossover acts of all time, and the 10th best-selling male artist in US history in terms of album sales.
He collaborated with other country music legends during his career, including Dolly Parton and Willie Nelson.
In 2007 he unexpectedly found himself back in the limelight in the UK when The Gambler became the unofficial World Cup anthem of England’s Rugby Team.
The song became so popular that during his 2013 Glastonbury Festival legends slot Rogers played it twice.
That same year, he was inducted into the Country Music Hall of Fame and received a Lifetime Achievement Award from the Country Music Association.
In their statement his family said he had “left an indelible mark on the history of American music”.
A keen businessman, Rogers led several ventures over the years, mainly in property and the restaurant sector.
He also acted in several movies and TV shows, including starring as a race car driver in the 1982 movie Six Pack.
During an interview with the BBC in 2013, he recalled his “obsession” with tennis, and said he became so good that he ranked higher than Bjorn Borg in the ATP’s doubles table.
He was married five times and had five children.
Kenneth Ray Rogers, popularly known as Kenny Rogers, was an American singer, songwriter, actor, record producer, and entrepreneur. He was a member of the Country Music Hall of Fame. Though he was most successful with country audiences, Rogers charted more than 120 hit singles across various music genres, topped the country and pop album charts for more than 200 individual weeks in the United States alone, and sold over 100 million records worldwide, making him one of the best-selling music artists of all time.
In the late 1950s, he started his recording career with jazz-singer Bobby Doyle, and joined the folk ensemble the New Christy Minstrels in 1961, playing double bass and bass guitar as well as singing. In 1967, he and several members of the New Christy Minstrels left to found the group the First Edition, with whom he scored his first major hit, “Just Dropped In (To See What Condition My Condition Was In)”, a psychedelic rock song which peaked at number five on the Billboard charts. As Rogers took an increased leadership role in the First Edition, and following the success of 1969’s “Ruby, Don’t Take Your Love to Town”, the band gradually changed styles to a more country feel. The band broke up in 1975-1976, and Kenny Rogers embarked on a long and successful solo career, which included several successful collaborations, including duets with singers Dolly Parton and Sheena Easton, and a songwriting partnership with Lionel Richie. His signature song, 1978’s “The Gambler”, was a cross-over hit that won him a Grammy Award in 1980 and was selected in 2018 for preservation in the National Recording Registry by the Library of Congress. He would develop the Gambler persona into a character for a successful series of television films starting with 1980’s Emmy-nominated Kenny Rogers as The Gambler.
Two of his albums, The Gambler and Kenny, were featured in the About.com poll of “The 200 Most Influential Country Albums Ever”. He was voted the “Favorite Singer of All Time” in a 1986 joint poll by readers of both USA Today and People. He has received numerous awards such as the AMAs, Grammys, ACMs and CMAs, as well as a lifetime achievement award for a career spanning six decades in 2003. Later success included the 2006 album release, Water & Bridges, an across the board hit, that hit the Top 5 in the Billboard Country Albums sales charts, also charting in the Top 15 of the Billboard 200. The first single from the album, “I Can’t Unlove You”, was also a sizable chart hit. Remaining a popular entertainer around the world, he continued to tour regularly until his retirement in 2017.
He acted in a variety of movies and television shows, most notably the title roles in Kenny Rogers as The Gambler and the MacShayne series for The NBC Mystery Movie, and the 1982 feature film Six Pack. He was a co-founder of the restaurant chain Kenny Rogers Roasters in collaboration with former Kentucky Fried Chicken CEO John Y. Brown Jr, reports BBC.