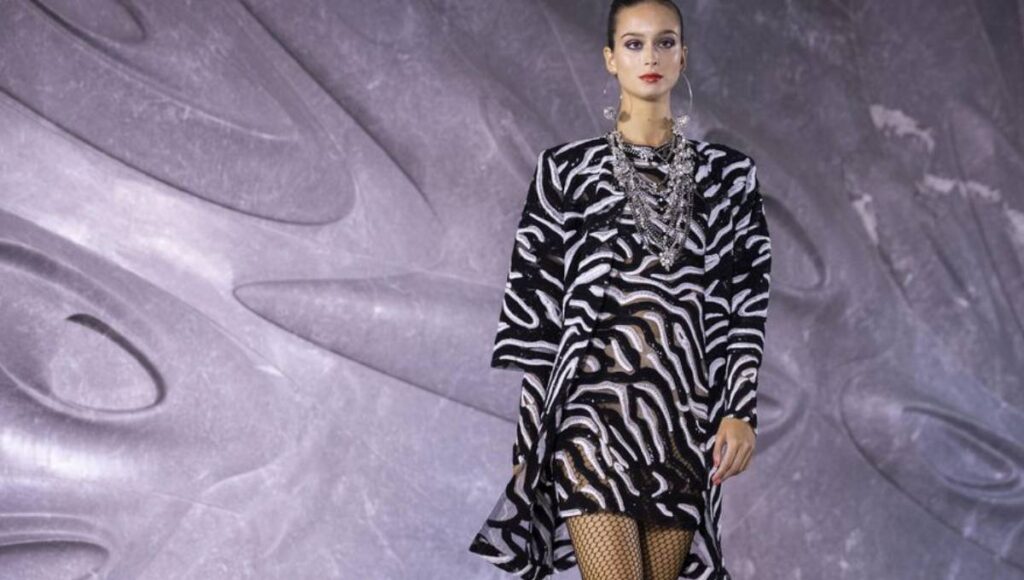 Naeem Khan brought it home with his new spring-summer 2020 collection, launching his runway show in the chic lobby and courtyard of his New York City apartment building.The longtime designer set up shop Tuesday on the ground floor of the ultramodern Zaha Hadid Building on Manhattan’s west side. Lucite chairs lined the entryway and outside space of the building — a modern metallic and glass structure with serpentine lines and rounded balconies towering over a courtyard. Hadid, who was a close friend of Khan’s, designed the building before her death in 2016.
Khan said the space Hadid created inspired the collection, calling it salon-like and intimate.
“Lots of separates, lots of coats, jackets, of course glamour, because I’m known for that, but it’s like fluid, it’s light, it’s airy. The pajamas are so chic. It’s like, tunics mixed with pants. Really glamour at its most relaxed form,” Khan told The Associated Press at the show.
A parade of models strutting in impossibly high stiletto heels entered into the building’s courtyard, with the evening breeze helping to increase the dramatic effect of the loose, flowing designs. Most wore slicked back updo’s with intricate fishtail buns, accentuated by huge gold hoop earrings with bejeweled parrots and seahorses.
The first several looks were animal print pajama pantsuits, dresses and jumpsuits with matching thin billowing jackets. While some prints were in the fabric, many were embellished with sequins, creating glittering texture.
Vibrant colors were also part of the collection and seen in silk pajamas with giant flowers. One knockout look was a bright, fuchsia satin halter sheath that poured down to the floor, with a stream of fabric down the back. Several designs honored Khan’s Indian heritage, including a pink Sari-inspired dress with a dramatic train of ombre’ effects of pink and orange chiffon, and a long green tunic dress with a decorative panel of beading.
There were glitzy wide-legged pants with matching tunics covered in monochromatic sequins of black, bright yellow and aquamarine. A metallic gold three-tiered backless dress shimmered, capturing the evening light as the sun set.
Khan has been in the fashion industry for 30 years and has dressed many A-list celebrities. He said glamour has changed and young people want to look beautiful but less “stuffy” so he is changing with the time.
Celebrities seated in the front row included Ryan Seacrest, reality star Kaitlynn Carter and Miss Universe Catriona Gray. Seacrest said he always tries to make time for Khan’s shows and he may have had extra incentive to attend.
“Amazing, stunning, glitz, glamour…I’m really in awe of what he did. And one of the models especially was incredible, my dear friend,” Seacrest said with a smile, referring to model Shayna Taylor, who walked in the show and whom he has dated in the past.
Gray said the Hadid building added to the mood.
“I loved the drama of this venue and paired with the music, it was operatic and there was a tribal feeling there also…there were sequins, there was chiffon, it was very feminine and romantic,” Gray said, reports AP,  New York.