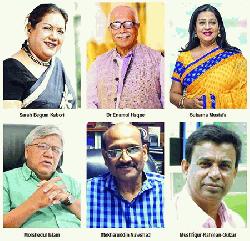 Culture Desk
A national advisory committee on film has been formed to advise the government on the local film industry and its development. Information ministry issued a circular in this regard on July 6 on its website.
The committee, according to the circular, comprises 24 members from administration and film industry insiders including information minister, state minister for information, secretaries of different ministries including home, industries, commerce and cultural affairs, managing director of Bangladesh Film Development Corporation, chief executive of Film and Television Institute, director general of Film Archives, alongside Bangladesh Film Directors’ Association president Musfiqur Rahman Gulzar, Bangladesh Film Exhibitors’ Association president Iftekharuddin Nawshad, actresses Sarah Begum Kabori, Suborna Mustafa, actor Dr Enamul Haque and filmmaker Morshedul Islam and others.
The committee will be tasked to advise the government, specially the information ministry and film associations, on issues regarding the development of local industry. The committee will also be responsible for formulating, if need be, film policies.
Film, also called movie or motion picture, is a medium used to simulate experiences that communicate ideas, stories, perceptions, feelings, beauty or atmosphere by the means of recorded or programmed moving images along with other sensory stimulations. The word cinema, short for cinematography, is often used to refer to filmmaking and the film industry, and to the art form that is the result of it.
The moving images of a film are created by photographing actual scenes with a motion-picture camera, by photographing drawings or miniature models using traditional animation techniques, by means of CGI and computer animation, or by a combination of some or all of these techniques, and other visual effects.