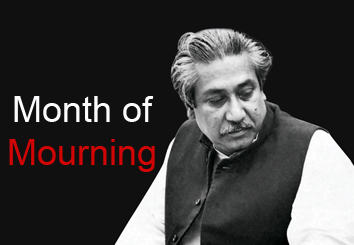 Bangladesh Awami League (AL) has chalked out elaborate programmes to observe the 44th martyrdom anniversary of Father of the Nation Bangabandhu Sheikh Mujibur Rahman and the National Mourning Day tomorrow (August 15).
On this day in 1975, the greatest Bangalee of all time, Bangabandhu, along with most of his family members, was assassinated in one of the most barbaric carnages in the human history.
As part of the programmes, the national and party flags will fly half-mast atop the all offices of Awami League and Bangabandhu Bhaban on the day.
In the morning, the party leaders will place wreaths at the portrait of Bangabandhu in front of Bangabandhu Museum in the capital city at 6.30 am.
Later, the party leaders will place wreaths and offer fateha at the Banani Graveyard for the family members of the Father of the Nation and others, who embraced martyrdom with Bangabandhu on August 15, 1975.
A delegation of the Awami League central executive committee including AL Presidium Members Sheikh Fazlul Karim Selim, Kazi Zafar Ullah and Muhammad Faruk Khan, executive member Abul Hasnat Abdullha, joint general secretaries Jahangir Kabir Nanak and Abdur Rahman, agriculture and cooperative secretary Faridunnahar Laily and information and research secretary Advocate Afzal Hossain, among others, will join the programmes in Tungipara on August 15.
The programmes include placing of wreaths at the shrine of Bangabandhu and offering fateha there.
Doa and Milad will be held at all mosques of the country after Zohr prayers, while special prayers will be held at temples, pagodas and churches marking the occasion.
The ruling party leaders will distribute foods among the poor, distressed and orphans at afternoon.
Besides, Mohila Awami League will organize a milad and doa mahfil in front of Bangabandhu Bhaban after Asr prayers.
On August 16, a discussion meeting will be held at Bangabandhu International Conference Center at 4pm. AL President and Prime Minister Sheikh Hasina will chair the meeting.
AL General Secretary and Road Transport and Bridges Minister Obaidul Quader has urged the leaders and activists of the party and its associate bodies to observe the day with due respect.