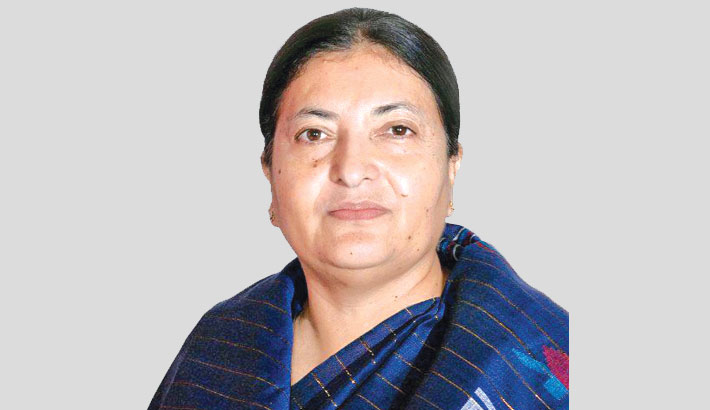 Dhaka, Mar 22 : Nepalese President Bidya Devi Bhandari arrived here on Monday on a two-day state visit to attend the ongoing twin mega celebrations and hold talks with Bangladesh leadership to take forward the growing relations.Bangladesh is hosting a 10-day special programme to celebrate the birth centenary of Father of the Nation Bangabandhu Sheikh Mujibur Rahman and 50 years of Bangladesh’s Independence that began on March 17 at the National Parade Ground.
The Nepalese President arrived here at the invitation of President of Bangladesh Abdul Hamid.
President Hamid received his Nepalese counterpart upon her arrival at Hazrat Shahjalal International Airport by a special flight of Nepal Air at about 10am.
A red carpet was rolled out to welcome the Nepalese President.
“A special flight of Nepal Air, carrying the Nepalese President along with other entourage, landed at Hazrat Shahjalal International Airport (HISA) at 10.10 am,” President’s Press Secretary Joynal Abedin told UNB.
President M Abdul Hamid welcomed the President at the airport after the warm reception, he added.
Both the Presidents and their delegation members properly maintained health rules due to the Covid-19 pandemic.
Besides, the Nepalese President was given a guard of hpnour by a smartly-turned out contingent drawn from Bangladesh Army, Navy and Air Force at the airport.
The Bangladesh President and his Nepalese counterpart received the state honour from a makeshift dais while the national anthem of the respective states was played.
Later, the state guest also inspected the parade at the airport.
Foreign Minister Dr AK Abdul Momen, Health Minister Zahid Maleque, Railway Minister Nurul Islam Sujon, State Minister for Foreign Affairs Shahriar Alam, and State Minister for Women and Children Affairs Begum Fazilatunnesa Indira were present at the airport.
The Cabinet secretary, the chief of three services, principal secretary to the Prime Minister’s Office (PMO), Inspector General of Police (IGP) and secretaries concerned to the President’s office were also present.
From the airport, the Nepalese President went to the National Martyrs’ Memorial at Savar to pay tributes to the Liberation War heroes by placing wreaths and signed the visitors’ book there and planted a sapling.
She also visited Bangabandhu Memorial Museum at Dhanmondi to pay tributes to Father of the Nation Bangabandhu Sheikh Mujibur Rahman.
The Nepalese delegation accompanying the President consisted of Minister for Foreign Affairs Pradeep Kumar Gyawali and Secretaries and senior officials of the Ministry of Foreign Affairs, the Office of the President and other relevant ministries.
President Bhandari will also attend the celebrations of the birth centenary of Bangabandhu Sheikh Mujibur Rahman on Monday afternoon as Guest of Honour while Prime Minister Sheikh Hasina will receive the Nepalese President at the venue.
On the occasion, the President will deliver a statement on the theme of “Nepal-Bangladesh Relations and Bangabandhu’s Birth Centenary”.
She will also hold talks with President Abdul Hamid at Bangabhaban. Meanwhile, Foreign Minister Dr AK Abdul Momen will meet the Nepalese President at Presidential suite of the hotel later in the day (Monday).
Several MoUs are expected to be signed between the two countries on tourism, cultural exchange, trade, and connectivity.
President Bhandari will also attend the State Banquet hosted by the President of Bangladesh in her honour after the signing ceremony and make a courtesy call at the presidential palace.
A cultural troupe is also there at the Nepalese delegation which will show a cultural performance during the birth centenary celebration programme in Dhaka.
The Nepalese President is also scheduled to visit the Embassy of Nepal, meet its nationals in Bangladesh and attend the luncheon to be hosted in her honour by the Ambassador of Nepal to Bangladesh.
President Bhandari will return to Nepal on Tuesday afternoon while Foreign Minister Dr Momen will see her off at the airport.
Earlier, President of the Maldives Ibrahim Mohamed Solih and Sri Lankan Prime Minister Mahinda Rajapaksa already attended the programme in person, while Indian Prime Minister Narendra Modi will visit Bangladesh on March 26-27 as part of the ongoing celebrations. Bhutanese Prime Minister Dr Lotay Tshering will also come to Dhaka before Modi’s visit, reports UNB.