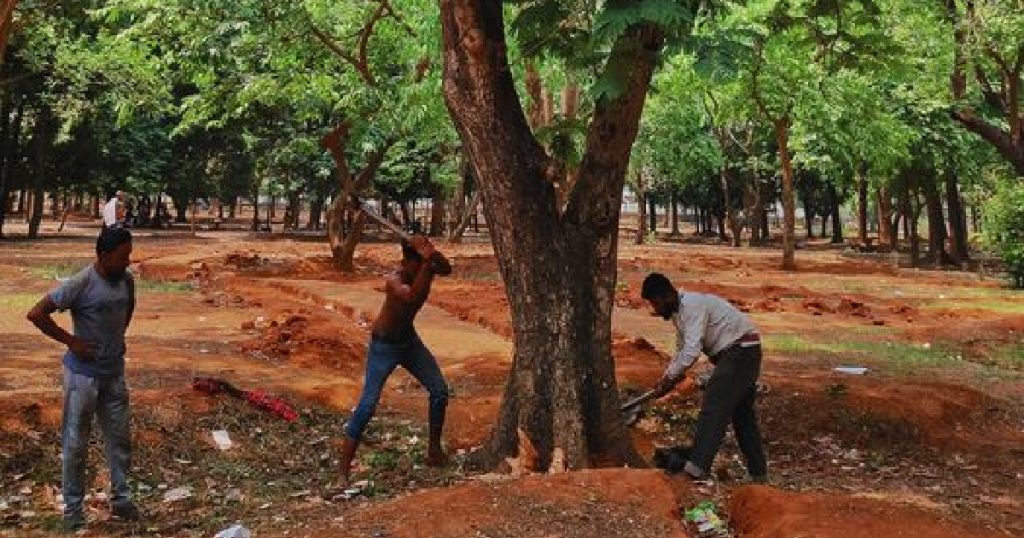 Dhaka, May 8 :  As the government gives priority to saving trees, no tree will be felled unnecessarily while implementing the mega plan at the historic Suhrawardy Udyan.“For that reason, the government will start planting trees in the coming monsoon and at least 1000 trees will be planted,” said the project director of Shawdhinata Stambha (independence monument) construction project (Third Phase) at the Suhrawardy Udyan M Habibul Islam.
He said that after the completion of the project it will take a beautiful look, he said.
“We hope that those who are denouncing now will appreciate it at the end of the project, if they have that kind of mentality to appreciate,” he said.
He said that people have to give the government that time and accept the temporary loss of some trees now.
Regarding the number of trees that will be cut down to implement the project, he said that the number of trees is not what is being shown in various photos in different newspapers, online media and social media.
“Does anyone cut down trees by marking such ways and drawing others’ attention?” he questioned.
Talking about the newly planted trees, M Habibul Islam, who is also Joint Secretary to the Liberation War Affairs Ministry, said that there will be various trees at Suhrawardy Udyan that flower throughout the year.
“We will try to ensure that flowers bloom all the year round at Suhrawardy Udyan which will increase greenery and create that atmosphere we need,” he said adding that there will also be gardeners to take care of these flowering trees.
He mentioned that after constructing the infrastructures, tree plantation and setting up of rides of Shishu Park all will appreciate that a well-planned project has been done.
The project director also refuted that there will be no restaurant in the area, rather there will be food kiosks.
Prime Minister Sheikh Hasina approved a mega plan of the Swadhinata Stambha construction (third phase) project in 2017.
The Ministry of Liberation War Affairs and the Ministry of Housing and Public Works are jointly implementing the development project worth Tk 265.44 crore. The project kicked off on 1 January 2018, with June 2022 being the completion deadline.
Under the project, the government will construct a 6.5km walkway and seven food kiosks on the premises of the park.
National Development Engineers Ltd has won the contract to execute the project.
Under the project, the location of the historic ‘7 March Speech’ of Father of the Nation Bangabandhu Sheikh Mujibur Rahman and the place where Pakistani occupation army surrendered and other historical events of the Liberation War will be preserved
Sculptures will be constructed at places where the Pakistani army surrendered to the joint force of Mukti Bahini and Indian Army and then Indian Prime Minister Indira Gandhi delivered her speech after the Liberation War.
Swadhinata Stambha plaza will be renovated and a podium for public meeting, benches and a water reservoir will be constructed.
Besides, murals will be set up on the walls of Shishu Park and 13 new rides will be included in the park.
Walkways are being widened so that people can walk avoiding the grass. Benches will be built for the visitors.
Seven food kiosks are being built so people can enjoy good food there. There will be restrooms for men, women, children and persons with disability and sheltering people during rain.
Previously, Suhrawardy Udyan was the Race Course ground. Bangabandhu Sheikh Mujibur Rahman gave his historic speech here on March7, 1971 by which he had prepared an unarmed nation for the Liberation War saying, “This time the struggle is for our freedom! This time struggle is for our independence!”
The defeated Pakistan forces of the Independence War also surrendered at the Race Course ground on December 16, 1971.
After independence, then Indian prime minister Indira Gandhi delivered her speech here on March 17, 1972 during her visit to Bangladesh.
The Liberation War Affairs Ministry initiated the Swadhinata Stambha (independence monument) construction project at the Suhrawardy Udyan.
The Department of Architecture under the Housing and Public Works Ministry designed the third phase of the project.
Construction of various structures, including an underground parking facility for 500 vehicles, a beautiful lake surrounded by walkways, an underpass, a mosque, a children park’s with the latest rides, food kiosks, a power sub-station, a sculpture of Bangabandhu Sheikh Mujibur Rahman, a sculpture on the site where Pakistan forces signed the instruments of surrender and the Indira Mancha, has been underway.
Construction of the first phase of the Swadhinata Stambha began at Suhrawardy Udyan in 1998, spending Tk 262.88 crore in the first and the second phases.
Works including a 150-feet glass tower construction, Shikha Chironton (eternal flame) at the north end of the ground, a lake, an underground museum, installing mural on wall, an open stage in front of Bangla Academy, a new gate and the metal fence surrounding the entire ground, have been completed at Suhrawardy Udyan in various phases.
Meanwhile, the Liberation War Affairs Ministry, in a press release on 5 May, said the ministry is implementing a mega plan at the historic Suhrawardy Udyan to present the actual history of the Independence War to the future generation and to the world.
“Though ‘several trees’ were felled during the implementation of the mega plan at Suhrawardy Udyan, initiative has been taken to plant about 1,000 more trees,” it said, reports UNB.