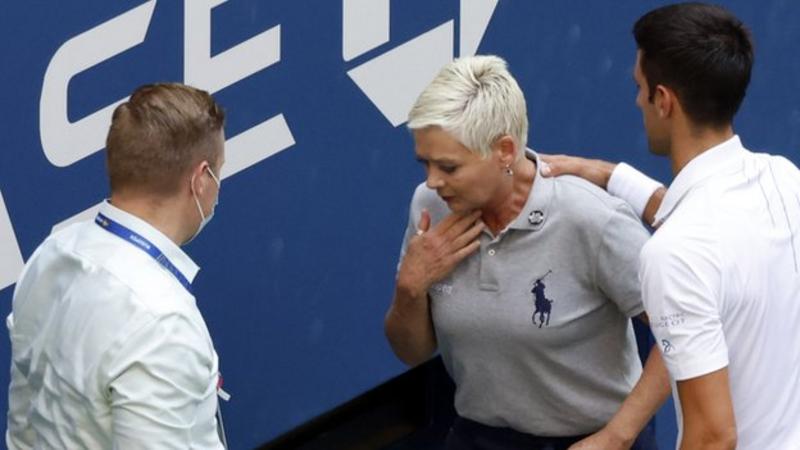 Top seed Novak Djokovic was disqualified from the US Open for accidentally hitting a ball at a line judge in his fourth-round match.Djokovic, 33, showed his frustration after losing serve to trail 6-5 against Spain’s Pablo Carreno Busta.
The Serbian world number one took a ball out of his pocket and hit it behind him, striking the female line judge in her throat.
After a lengthy discussion, he was defaulted by tournament officials.
 ‘Sad and empty’ Djokovic ‘extremely sorry’ for hurting line judge
 Right decision to disqualify Djokovic, says Henman
A United States Tennis Association statement said: “In accordance with the Grand Slam rulebook, following his actions of intentionally hitting a ball dangerously or recklessly within the court or hitting a ball with negligent disregard of the consequences, the tournament referee defaulted Novak Djokovic from the 2020 US Open.
“Because he was defaulted, Djokovic will lose all ranking points earned at the US Open and will be fined the prize money won at the tournament in addition to any or all fines levied with respect to the offending incident.”
Djokovic was the heavy favourite to win the men’s singles title at the US Open, which is being played behind closed doors and is the first Grand Slam to take place since the beginning of the coronavirus pandemic.
Going into the encounter with 20th seed Carreno Busta, Djokovic had not lost a singles match in 2020.
He was aiming for an 18th Grand Slam triumph to move closer to rivals Rafael Nadal and Roger Federer, who are not playing in New York, in the race to finish with the most men’s major titles of all time.
Djokovic’s exit means there will be a new male Grand Slam champion for the first time since Marin Cilic won at Flushing Meadows in 2014.
A player outside of Djokovic, Federer and Nadal will win a major for the first time since Stan Wawrinka won the US Open in 2016.
Carreno Busta, who reached the US Open semi-finals in 2017, will play either Belgian seventh seed David Goffin or Canadian 12th seed Denis Shapovalov in the quarter-finals.
Djokovic’s costly moment of frustration – how the drama unfolded
Djokovic had been playing well up until the game where he lost serve and had three set points at 5-4 before Carreno Busta fought back from 0-40 down.
However, the world number one also showed a flash of his temper during that ninth game by whacking a ball into an advertising board after the Spaniard brought it back to deuce.
Leon Smith, Great Britain’s Davis Cup captain, said he was “surprised” Djokovic did not get a warning for that incident, and felt one might have prevented the controversy which followed.
After Djokovic was defaulted, Smith told BBC Radio 5 Live Sports Extra: “There has to be consistency, if someone hits a ball with that much venom and temper, call a warning.
“The second one can be dangerous and so it proved to be.”
In what proved the final game, Djokovic fell and hurt his shoulder, immediately calling for a medical timeout when trailing 0-30. Following treatment, the match resumed with Carreno Busta sealing the game three points later.
It was then that Djokovic hit the ball away, striking the line judge.
Djokovic appeared to plead his case to tournament referee Soeren Friemel and Grand Slam supervisor Andreas Egli during a long conversation at the net.
Eventually, however, he accepted his fate and shook hands with Carreno Busta, who looked shocked by what had happened as he waited for a decision in his chair.
Djokovic left Flushing Meadows without doing his news conference and later posted an apology on his Instagram page.
Djokovic’s opponent Pablo Carreno Busta: “I didn’t see the moment, I was looking at my coach, celebrating the break and then I saw the line judge on the floor. I was in shock.
“When they were talking at the net I was focused in case I had to continue playing. This moment was so long. Finally Novak gave me the hand.
“I think it was not intentional. I don’t think anyone of us do this intentionally. It’s just the moment. It was bad luck.
“Of course you can’t do this. The rules are the rules. The referee and the supervisor did the right thing but it isn’t easy to make this decision.”
GB Davis Cup captain Leon Smith on BBC Radio 5 Live Sports Extra: “It’s a habit. He did it five minutes beforehand, with much more venom, and he was just lucky it hit the advertising board. It could have hit one of the ball kids.”
Martina Navratilova, winner of 18 Grand Slam singles titles: “Unbelievable what just happened on the court at the US Open – Novak Djokovic defaulted for inadvertently but stupidly hitting a lineswoman in the throat with a ball and the officials had no choice but to default. Wow. Glad the woman is OK – we must do better than that.” – BBC Sport