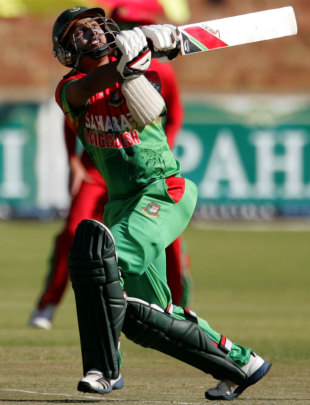 Dhaka – Bangladesh will take on visiting Zimbabwe in the first ODI of a three-match day-night series at Sher-e-Bangla National Cricket Stadium on Sunday.The match will begin at 2:30pm Bangladesh time and the Tigers’ fans have already known that they are going to miss the displays from dashing opener Tamim Iqbal and talismanic all-rounder Shakib Al Hasan in the series as both are sidelined from squad due to injury.

Despite not having two senior dependable players, Bangladesh skipper Mashrafe Bin Mortaza expressed optimism before the start of the series as he said, “We are confident. We hope for the win.”

The inspirational captain informed that his boys took preparation in a way that they can covour the gap what shaped in absence of Tamim and Shakib.

“It is known to all that Tamim and Shakib will not with us. So, we have preparation to face the challenges without them,” Mashrafe was talking at pre-match press conference at the match venue on Saturday.

Mashrafe assured to form the best possible eleven and hopped the boys, who will get chance into eleven, will have opportunities to prove themselves through the series before the World Cup 2019.

“Since it is Mirpur, it is tough to predict how it will play. We are not expecting the wicket [pitch] to be slow or with turn right from the start. We are hoping for a good wicket,” said Mashrafe replying to a query. According to Mashrafe, the score range from 250 to 260 can be defendable against Zimbabwe at Mirpur ground.

Pace bowler Rubel Hossain is suffering from fever, but he could yet be fit for the first game. Bangladesh may pick both Imrul Kayes and Nazmul Hossain Shanto in the top order alongside Liton Kumar Das for the opening slot. At number seven, it is a three-way battle among Mohammad Saifuddin, uncapped Ariful Haque and Fazle Mahmud.

In this regard Mashrafe said, “Though we have lack of backup players, but players like Saifuddin and Fazle Mahmud make us optimistic.”

H Masakadza also expects positive results. “We are familiar with the condition of Bangladesh and with the team. Yes we lost [against South Africa], but the main thing is to focus on tomorrow. Stay positive, play positive is the principle for win against Bangladesh.”

“Yes, Bangladesh improved a lot in the last couple of years, but we are still positive and have chance,” H Masakadza added.

In their previous 69 ODI encounters, Bangladesh registered 41 victories against 28 losses. Zimbabwe also arrived in the midst of a seven-month losing streak, having been whitewashed by both Pakistan and South Africa in their last two series.

Fortune also didn’t favour the Zimbabweans in their warm-up game against BCB XI on Friday where H Masakadza scored a century of 102 and Elton Chigumbura 47, but no other batsman could reach double figures and BCB XI got eight-wicket win with Soumya Sarkar’s unbeaten 102* and Ebadat Hossain’s haul of five wickets.
Zimbabwe came to Bangladesh with their best team as senior players -Brendan Taylor, Craig Ervine and Sean Williams back in the fold, ending a self-imposed hiatus. They have also drafted left-handed batsman Cephas Zhuwao into their squad as a hit-and-miss option.

Sikandar Raza will slot straight back into a middle order, but the visitors have an opening challenge to answer. Solomon Mire struggled with single-figure through their last series against South Africa. Craig Ervine’s trial as a provisional opener in the warm-up was bad experience as he lasted for just three balls before being caught behind off Ebadat Hossain.

However, the next two ODIs of the series will be held at the Zahur Ahmed Chowdhury Stadium (ZACS) in Chattogram on October 24 and 26.