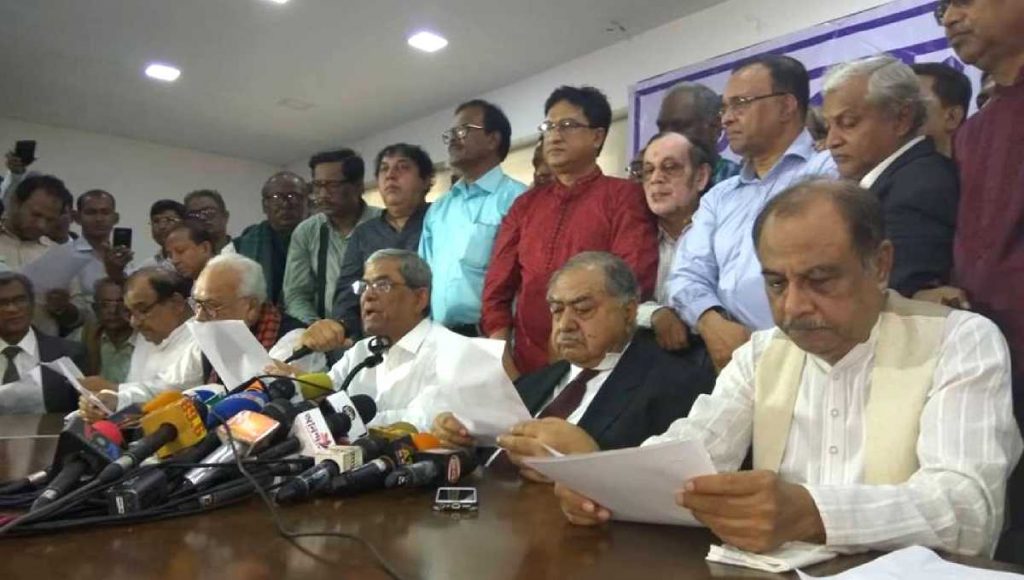 Dhaka, Feb 01 – The opposition alliance Jatiya Oikya Front on Friday hailed Prime Minister Sheikh Hasina for inviting its leaders to her today’s tea party at her official residence Ganabhaban regretting their inability to take part in it.
The Oikya Front in a letter sent to the Prime Minister questioned the morality of the government formed after what it said following a farcical election on December 30.
The minimum democratic rights of the country’s people and rights to elect their representatives by franchising their voting rights have been snatched on that day, said that letter.
The letter signed by signed by Oikya Front steering committee member Subrata Chowdhury thanked the premier for the invitation saying that the Oikya Front steering committee in a meeting on Thursday unanimously decided not to take part in the tea party.
“Thousands of Oikya Front leaders and activists are still in prisons. More innumerable leaders and activists are being arrested in new cases. Under the circumstances, it’s not possible in any way to join
the Prime Minister’s tea party” explained the one-page letter.
A three-member delegation led by Oikya Front office secretary Jahangir Alam Mintu reached the letter at Prime Minister’s official residence.
The delegation handed over the letter to Prime Minister’s protocol officer-2 Khorshed Alam at 12:55 pm, confirmed Jahangir Alam Mintu.
The two other members of the delegation are Oikya Front media wing chief Jahangir Alam Prodhan and Azmeri Begum Chanda.
Earlier on January 26, the Prime Minister sent a letter to the Oikya Front inviting its leader to join exchange greetings at Ganobhaban over tea on February 2.
The Oikya Front leaders, led by its top Dr Kamal Hossain had dialogue twice with the Prime Minister on November 1 7 last at Ganabhaban before the 11th parliamentary elections and decided to take part in
the election even none of its seven-point demands were met.
The Oikya Front was formed on November 13 comprising BNP, Gano Forum, JSD (ROB) and Nagorik Oikya. Bangabir Kader Siddique-led Krishak Sramik Janata League also joined the alliance, later on.
The AL-led Grand Alliance swept the 11th parliamentary election with 289 seats, out of 300, and formed the government, while the BNP and its partner Ganaforum got only eight seats and rejected the poll
results, alleging “vote engineering.”
Meanwhile, speaking at a protest meeting at Jatiya Press Club, BNP vice-chairman Dr Mahbub Hossain termed the premier’s invitation to Oikya Front leaders for tea as a mockery considering the circumstances of the 11th general election.
He urged the party leaders and activists to take to the streets and wage a stronger movement for the release of BNP Chairperson Khaleda Zia.
Nagorik Odhikar Andolan Forum organized the meeting. – Staff Reporter