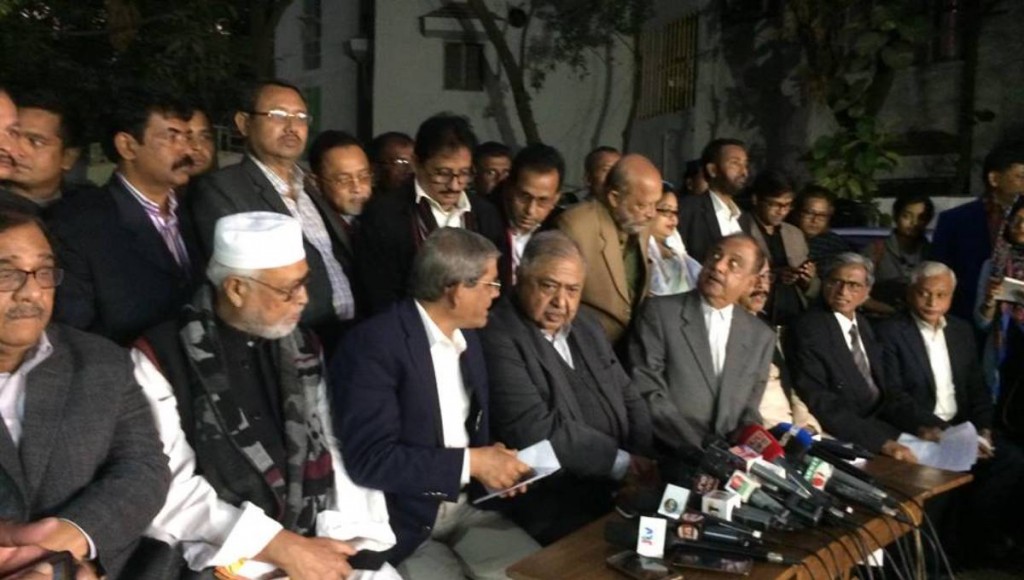 Jatiya Oikyafront on Tuesday worked out three programmes, including holding a national dialogue, to force the government to hold fresh election cancelling the results of the 11th parliamentary polls.
BNP Secretary General Mirza Fakhrul Islam Alamgir announced the programmes after a meeting of top leaders of the alliance at Dr Kamal Hossain’s Bailey Road residence in the city.Two other programmes are filing cases with electoral tribunals soon and making visits by top leaders of Jatiya Oikyafront to the areas hit by violence during the election, he said.
Fakhrul said their alliance’s top leaders will first visit Balaganj in Sylhet within a week as an activist of their alliance was killed there.The Oikyafront spokesman, however, did not mention when their alliance will arrange the national dialogue.
Dr Kamal Hossain said they discussed at their meeting what happened during the December-30 election. “We voiced concern that people couldn’t elect their representatives through the election as per our hopes and aspirations.”He said the government and the Election Commission held something else in the name of the election, and published its results. “A government has also been formed based on such results.”
Later, Fakhrul read out a written statement of the alliance and demanded the Election Commission (EC) immediately provide the alliance with the copies of the election results of every polling station.He said they need the copies of the centre-based election results so that they can present those before the court to prove that the December-30 election was not held as per the constitution.
Under the current circumstances, Fakhrul said, “We strongly demand a fair and neutral election be held under a non-party impartial government and a neutral Election Commission.”
He said people on December 30 could not cast their votes as they got panicked due to the violence unleashed by the government-backed ‘terrorist elements’. “So, people were deprived of their constitutional and democratic rights and the rights of expression.”
As per the UN Convention and the Human Rights, the Oikyafront spokesman said, human rights were snatched through the 11th parliamentary election. “According to Bangladesh’s Constitution and the international laws, such acts of officials involved with the election are serious offences.”
Fakhrul said the Election Commission deceived the country’s people, who are the owners of the country, through the parliamentary elections.He said the election was turned into a ‘farce’ by ‘abusing’ the power of the law enforcers and administrative officials and making army’s role ‘ineffective’.
Oikyafront senior leaders, including Mirza Fakhrul Islam Alamgir, ASM Abdur Rab, Abdul Kader Siddique, Mahmudur Rahman Manna, Subrata Chowdhury Mostafa Mohsin Montu and Dr Zafrullah Chowdhury, held the hour-long meeting with Dr Kamal Hossain in the chair.