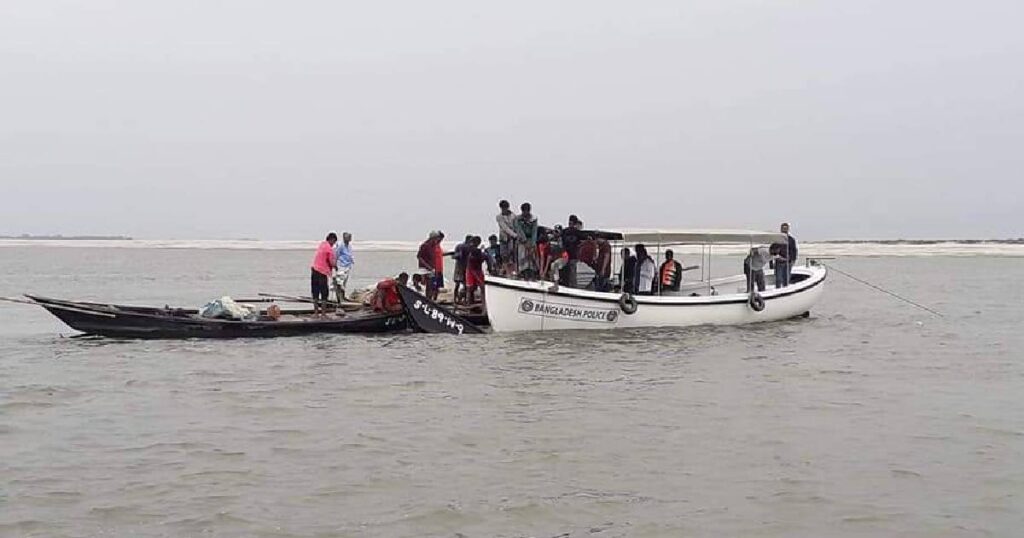 The bodies of two people who went missing after two boats capsized in the Padma River on Friday was recovered on Saturday, raising the death toll from the incidents to three.The deceased were identified as Moni Khatun, 40, of Dangerhat in Poba upazila and Eklas Ali, 22.
Mehedi Masud, officer-in-charge of river police, said the body of Eklas was retrieved from the accident spot around 1pm.
Lt Zia Uddin Mahmud, commander, BGB-1, said BGB members recovered the
body of Moni Khatun from Yusufpur area in Charghat upazila in the morning.
Nine people including a bride went missing after two boats sank in the Padma River at Char Khidirpur on Friday evening due to heavy current.
After the incident, the body of a minor child was retrieved from the river on Friday.
The missing bride is Sweeti Khatun Purni, 20, daughter of Insar Ali of Char Khidirpur.
The boats were carrying more than 35 passengers who were returning home after attending a post-wedding reception at the groom’s house at Char Khidirpur, said a youth who managed to swim ashore.
Rajshahi deputy commissioner Md Hamidul Haque said that a diver team of Bangladesh Inland Water Transport Authority(BIWTA)) joined the rescue drive in the morning along with fire service team, BGB and Police.
He also said that a five member committee led by additional district magistrate Abu Aslam has been formed to investigate the incident.
The district administration gave Tk 20,000 to each deceased’s family, reports UNB.