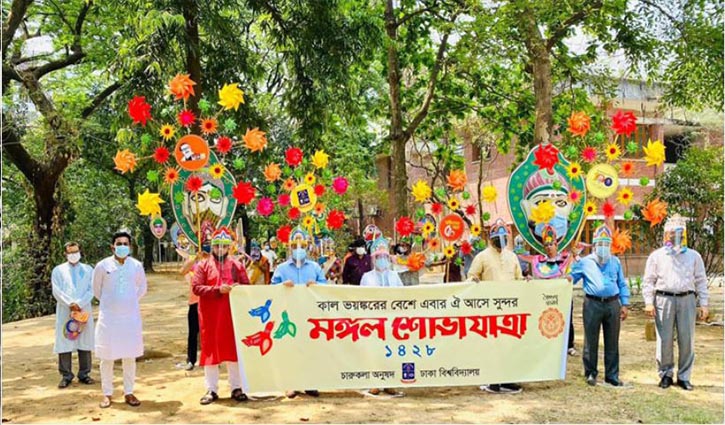 Dhaka, Apr 14 : For the second year in a row, Pahela Boishakh celebrations remained muted across Bangladesh due to the lockdown enforced by the government to curb the rising cases of Covid-19.All television channels aired a special programme on Wednesday morning as people stayed indoors on the first day of the Bangla calendar.
Pahela Boishakh is celebrated every year in Bangladesh on April 14. But this year, all programmes have been cancelled to avoid mass gatherings in a bid to break the chain of the virus transmission.
Pahela Boishakh celebrations have become an integral part of the Bangalis since it began more than six centuries ago.
Mughal Emperor Akbar introduced the Bangla calendar in the year 1556 of the Gregorian calendar in a bid to streamline the timing of land tax collection in the then ‘Subah Bangla’ region, much of which now falls in Bangladesh.
The day is a public holiday.
Renowned cultural organisations and institutions, including Chhayanaut, the Faculty of Fine Arts (FFA) of Dhaka University, Bangladesh Shilpakala Academy (BSA) and Liberation War Museum Bangladesh (LWM), have all lined up online events to welcome the new year 1428.
The marquee events of the day — the traditional Borsho-Boron programme by Chhayanaut and the Mangal Shobhajatra parade by FFA, Dhaka University — have all been cancelled. Both Chhayanaut and FFA broadcast pre-recorded programmes on national TV.
First observed in 1989 by FFA as a colourful procession celebrating the Bengali New Year with the participation of people from all walks of life, the annual Mangal Shobhajatra received the recognition of UNESCO as an intangible cultural heritage on November 30, 2016.
Unfortunately, the plan to organise the event this year had to be shelved this year due to the Covid pandemic.
“Initially, the Dhaka University authorities decided to arrange a symbolic event on the FFA premises on Pahela Boishakh, as it has always been culturally very significant and this year marks the Golden Jubilee of our Independence. As per the government’s lockdown restrictions, we pre-recorded a symbolic Mangal Shobhajatra for 1428 with the participation of our State Minister for Cultural Affairs and fewer than 20 people, showcasing our banner and 100 prop items made by our students and teachers, including face shields and masks,” Nisar Hossain, Dean of the FFA, told UNB on Tuesday.
OnMonday, Chhayanaut general secretary Laisa Ahmed Lisa said, “As we could not celebrate Pahela Boishakh 1427, we had been preparing to organise the programme this year without the crowd at the venue.
But sadly this time too, we have decided to broadcast this year’s event on Bangladesh Television (BTV).”
“The programme showcase a compilation of some of the new and previous performances of Chhayanaut artistes, and this year we are featuring performances focusing on the Golden Jubilee of our glorious Independence. Apart from BTV, Chhayanaut will also broadcast the programme on its YouTube Channel Chhayanaut Digital – Platform,” she added.
Bangladesh Shilpakala Academy (BSA) also broadcast a live webinar and cultural programme on its official Facebook page and YouTube channel, which was joined by former Cultural Affairs Minister and eminent thespian Asaduzzaman Noor.
BSA Director General Liaquat Ali Lucky presidedbover the virtual event, which was also be joined by prominent educator Prof Syed Manzoorul Islam, Nazrul Sangeet maestro Khairul Anam Shakil, folk singer Akramul Islam and Rabindra Sangeet singer Lily Islam.
Liberation War Museum and Wrishiz Shilpi Goshthi also held online programmes on Facebook on the occasion.
This year, April 14 also marks the first day of the holy month of Ramadan in Bangladesh and some other Muslim countries in the world.
On the occasion, President Abdul Hamid and Prime Minister Sheikh Hasina issued separate massages greeting the countrymen and all Bangla-speaking people across the globe.
Prime Minister Sheikh Hasina on Tuesday urged everyone to follow health guidelines and celebrate Pahela Boishakh at home, in the wake of a surge in Covid-19 cases.
“We have to remember that the lives of the people come first. If (we) survive, we’ll be able to rearrange everything,” she said, while addressing the nation on the eve of Pahela Boishakh, reports UNB.