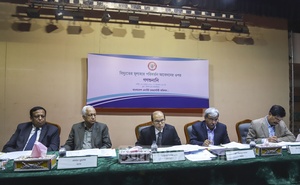 Power Development Board or BPDB has proposed to the energy regulator to increase bulk electricity tariff by 23.27 percent per unit to trim its losses.
The state-owned agency made the proposal at the public hearing on bulk power tariff and transmission cost, held by the Bangladesh Energy Regulatory Commission or BERC on Thursday.However, after reviewing the proposal, the BERC said the price can be increased by 19.5 percent per unit to adjust transmission costs.
At the hearing, BPDB General Manager (commercial operation) Md Kausar Ameer Ali said that the bulk electricity transmission cost was Tk 5.83 in fiscal 2018-19 and now electricity bulk tariff rate is Tk 4.77.
“As a result, the BPDB faced a loss of over Tk 68.62 billion in the last fiscal year.”
The BPDB estimated a loss of about Tk 86 billion next year taking the rising transmission cost into account.
The other reasons for the electricity tariff hike include the depreciation of taka against foreign currency, rising gas price, 5 percent VAT imposition on coal, power generation cost increase and the non-payment of electricity bills by some distribution agencies, according to the BPDB official.
The power distribution companies started submitting the price hike proposals to the BERC in the middle of October, reports internet.