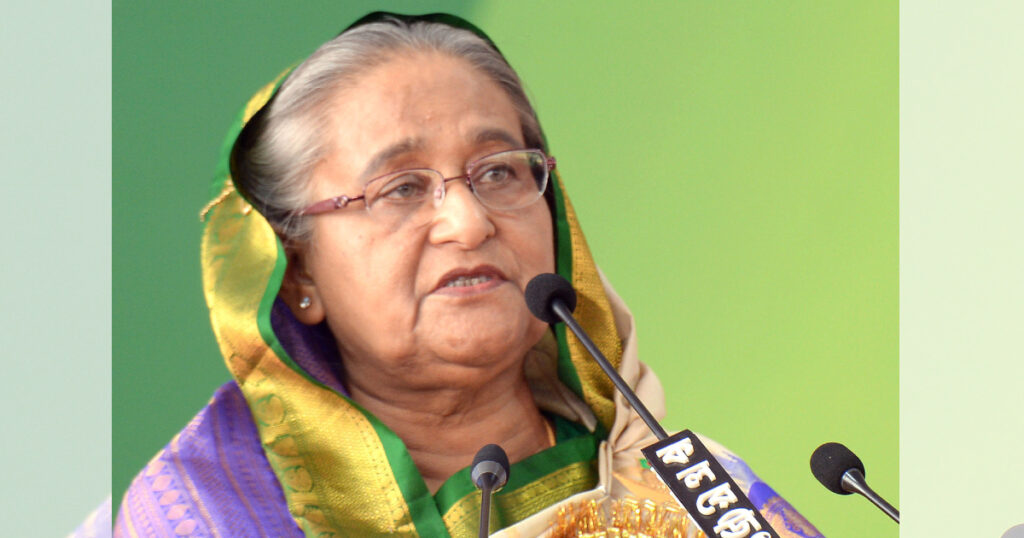 Dhaka, Jan 21 – Prime Minister Sheikh Hasina has said the government has restored academic atmosphere in all the educational institutions and now it is the responsibility of teachers and students to perform their respective responsibilities.“There have been no rattles of guns [on campuses] since we’ve formed the government… we’ve brought back the academic atmosphere. Now it’s the responsibility of the teachers and students to teach and learn,” she said.
The Prime Minister said this while virtually addressing an international conference titled ‘Celebrating the 100 Years of the University of Dhaka: Reflections from the Alumni – International and National’ on the occasion of the university’s birth centenary with a theme, ‘Achieving Sustainable Goals and Building a University Suitable for Fourth Industrial Revolution and Creating Skilled Human Resources’.
Sheikh Hasina said it is not possible to advance the country further without an educated nation.
“It’s not possible to have poverty- and hunger-free Bangladesh as dreamt by the Father of the Nation without having an educated nation. That’s why we always give the topmost priority to education,” she said.
The Prime Minister said higher education is absolutely needed to catch up with the fast-moving world. “That’s why we’ve given importance to science and technological education.”
Hasina said the government has diversified education in Bangladesh and established universities in many districts across the country. “The Father of the Nation had wanted to build Golden Bengal and we’re working towards that end.”
Talking about the history of the Dhaka University, she said this university always played its role in all struggles for establishing democracy in the country and led every democratic movement, including the Language Movement, Independence and anti-military dictator movements.
“One must not see Dhaka University as just an educational institution as it’s the institution of Bangladesh that showed us the path of all achievements,” she said.
Sheikh Hasina, who is also an alumnus of the university, said she wanted to see further development of the Dhaka University.
About the fourth industrial revolution and manpower, she said that the Dhaka University can take the lead in building skilled manpower which can be followed by other universities of the country.
Hasina said the government is working for the development of the university and a master plan in this regard has been formulated.
“We want to see Dhaka University as a modern knowledge and science-based one. And this university will get every cooperation from my side,” she said.
The Prime Minister urged Dhaka University authorities to give greater focus on doing research work as it can take the country to its desired level.
Education Minister Dr Dipu Moni addressed the opening ceremony as special gust while prominent economist Rehman Sobhan presented the keynote speech. It was held at the university’s Nabab Nawab Ali Chowdhury Senate Bhaban with DU Vice-chancellor Prof Dr Md Akhtaruzzaman in the chair.
A total of six thematic webinar series will be held throughout the year with one in every month following the first one – Science for Society in February, followed by Arts, Literature and Culture in March, Business in April, Social Sciences in May and Futures of Higher Education in June.
Regarded as the country’s prestigious academic institution, Dhaka University has taken grand plans to celebrate its centenary as well as the golden juvenile of Bangladesh’s great Liberation War in 2021.
The university started its academic activities on July 1, 1921, with 12 departments, three faculties, 60 teachers, 877 students, three residential halls on 600 acres of land. – UNB