By Caley Pigliucci
UN, Jun 2019 (IPS) – The plant-life on the Pacific Islands is currently under threat as protections against diseases and pests are left in the hands of under-trained personnel with limited facilities.
Talei Fidow-Moors, the Principal Quarantine Officer at the Ministry of Agriculture and Fisheries in Samoa, warned in a statement to IPS of an “increased potential of introducing regulated pests and diseases that pose a serious threat to agriculture, livelihood and fragile ecosystems.”
Plant biosecurity aims at protecting plants from these diseases and pests that non-native species bring into a region. The World Health Organization (WHO) calls biosecurity an “essential of sustainable agricultural development.”
Despite its importance, over a five-week training course with the Pacific Plant Biosecurity Partnership (PPBP) that finished on May 31, biosecurity ‘champions’ from countries across the Pacific Islands noted biological threats largely due to a lack in knowledge of biosecurity, which the training program attempted to begin to address.
IPS spoke with three biosecurity ‘champions’ from Kiribati, Samoa, and Vanuatu who were in training with the PPBP to increase biosecurity provisions.
Each representative identified a lack knowledge as the main obstacle on the Pacific Islands that thwarted attempts to achieve biosecurity aims.
The Pacific Islands have been experiencing an on-going increase in trade and tourism, but with this increase comes an increase in potential pests and diseases crossing the borders. These pests and diseases pose a serious threat to natural plant-life on the islands.
Tekataake , a representative from the Biosecurity and Plant Health Section of the Agriculture and Livestock Division of Kiribati told IPS that plant biosecurity is the “first line of against threat,” but one that often gets swept under the rug.
For , the main issue is in “the lack of appropriate facilities and people in the Biosecurity field.”
Without proper training and facilities, the importing of diseases and pests becomes all too easy.
Sylvie Boulekouran, from the Ministry of Agriculture, Livestock, Forestry, Fisheries and Biosecurity (MALFFB) in Vanuatu, told IPS that she worries that, “due to staff limited knowledge on inspection and early detection of weed seeds, imported tend to enter the country without proper inspection.”
Boulekouran identified coconut rhinoceros beetles as a significant threat to biosecurity in Vanuatu.
The Department of Agriculture and Rural Development in Vanuatu states that at least 75 percent of the population lives in rural areas and lists copra (dried kernels from coconuts) as the main cash crop of the region.
Coconut rhinoceros beetles cause damage to the palm trees that produce that cash-crop, and if not controlled, this could have severe effects for rural populations, and for the country’s economy as a whole.
She told IPS of her concern that combating coconut rhinoceros beetles and weeds proves difficult when “biosecurity Vanuatu plant health staff have limited skills and knowledge to carry out diagnostics and identification of pests intercepted at the Vanuatu borders.”
Not only are diagnostics difficult with limited training, but also with limited facilities.
in Vanuatu, there are no facilities for identifying threats. Samples are sent to countries like New Zealand, making the interception of pests and diseases time-consuming, and they often fail to do so quickly enough.
sees similar issues at the border of Kiribati.
She told IPS she would like to see “robust import conditions [that] will ensure that imported commodities are free from pest and diseases and enhance safe trade.”
She added that there is a need for “establishing and incorporate[ing] changes at borders to facilitate effective biosecurity inspection and identification of infested consignments.”
Adding to limited training and limited facilities is the major difficulty facing all three countries: climate change.
Climate change has been a constant difficulty for maintaining biosecurity in the region. In Samoa, increases in tropical cyclones and rising sea levels have added to food insecurity.
In Kiribati, noted that climate change makes plants even “more vulnerable to the impact of pest and diseases, hence threatening food security and the environment.”
With the forces of climate change bearing down on their countries, the representatives see a need to push for more training in of biosecurity threats, and more facilities with which to identify.
The representatives from the Pacific Islands all believe in the need for a conversation to take place at a global level about plant biosecurity.
said to IPS that at “an international level it would be helpful if we all take Biosecurity as [a] serious matter, whether we are making policies or providing financial grants.”
When asked by IPS what international bodies, like the United Nations, can be doing to help, Fidow-Moores replied: “The UN and its citizens can motivate countries of the world and people from all walks of life, providing everyone with a deeper understanding of nature, society, a better quality of life and a sustainable and healthy environment for present and future generations.”
But the representatives are not without hope.
While each biosecurity representative sees the difficulties in increasing provisions, they all return to their countries after the training session with optimistic minds.
Fidow-Moores told IPS: “It is a challenge which I believe is worth attempting to overcome, so as to exert positive changes for our small island nation.” 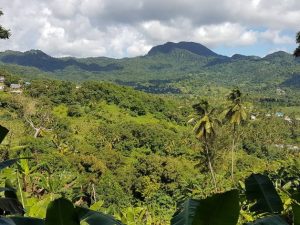