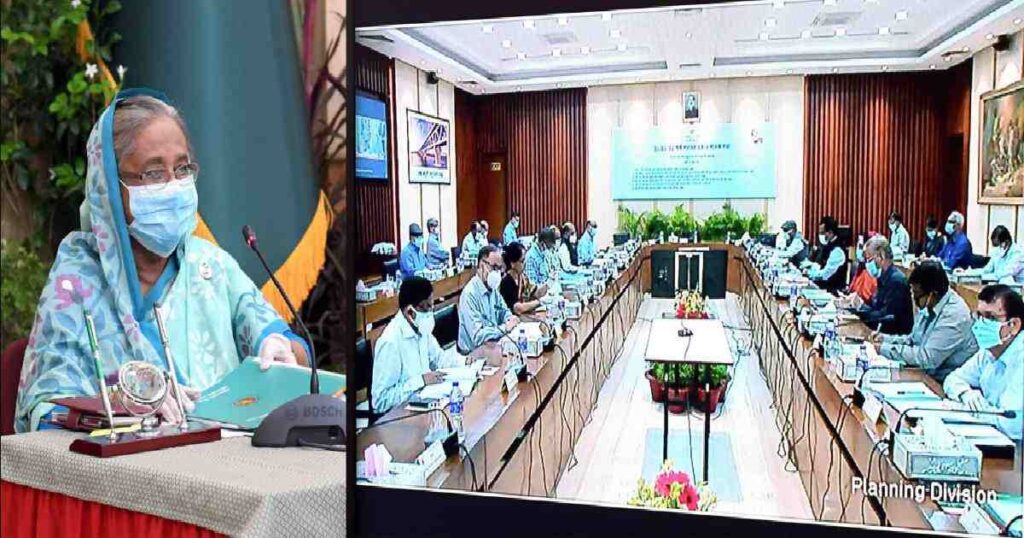 Dhaka, July 21 – Expressing dissatisfaction at delay in implementation of development projects, Prime Minister Sheikh Hasina on Tuesday asked different departments concerned to strengthen coordination among them to avert delay in project activities.“The Prime Minister has expressed dissatisfaction over the slow pace in our (development) works and asked all concerned to expedite those. Lack of coordination (in implementation of projects) came to her (PM’s) notice…she repeatedly asked different departments to strengthen it (coordination),” said Planning Minister MA Mannan at a virtual briefing after the weekly Ecnec meeting.
The Executive Committee of the National Economic Council (Ecnec), in its 3rd meeting of the current fiscal year held with Chairperson and Prime Minister Sheikh Hasina in the chair, approved six projects with an outlay of some Tk 1,137 crore.
“We’ve placed six projects of four ministries at the meeting. All the projects were approved. The total estimated cost of implementation of the projects is Tk 1,136.84 crore,” said MA Mannan.
Of the cost, 1,028.51 crore will come from the state coffer while Tk 108.30 crore from foreign sources as project assistance, Mannan said.
Among the projects, four are fresh while the rest two are revised ones, said the minister.
Both the Prime Minister and the Planning Minister joined the meeting from Ganobhaban through a videoconference, while other Ecnec members were connected from NEC Bhaban.
Three of the six projects are of the Water Resources Ministry, while one each of Agriculture and Housing and Public Works Ministries, and the Road Transport and Highways Division.
The two revised projects are ‘Widening and Improvement of Khulna Shipyard Road (1st revised) Project’ with an increased amount of Tk 132.63 crore; and ‘Land Acquisition for Road widening of Nangalbandh-Minar Bari part of Langalbandh-Kaikartek-Nabiganj district highway (1st revised) Project’ with an additional cost of Tk 138.84 crore.
While revising the Khulna Shipyard Road project, the Prime Minister expressed her resentment for the slow pace in the project works and asked the authorities concerned to find out the reasons behind the delay, said the Planning Minister.
“Unfortunately, its pace is very slow…the Prime Minister expressed serious resentment and annoyance. She asked us to find out the reasons,” Mannan said.
During the revision of Langalbandh land acquisition project, the Prime Minister also showed resentment as lack of coordination was seen and unnecessary complexities were created here, he said.
Sheikh Hasina directed the authorities concerned to take measures for checking unnecessary delay in the project works.
The Prime Minister highly appreciated ‘Intensification of crops in the greater Mymensingh region project’ approved at the meeting, said the minister adding that the project will be implemented by December 2024 spending Tk 123.66 crore.
Three other projects are Re-excavation of Titas River (lower Titas) and Homna Upazilas in Cumilla at a cost of Tk 76.25 crore; Protection of Jamuna River’s Right Bank from erosion at Goghat, Khanbari and surrounding areas of Sadar and Sundarganj Upazilas of Gaibandha project involving Tk 401.79 crore; and Char Development and Settlement Project-Bridging (Additional Financing) (BWDB part) with Tk 263.67 crore. – UNB