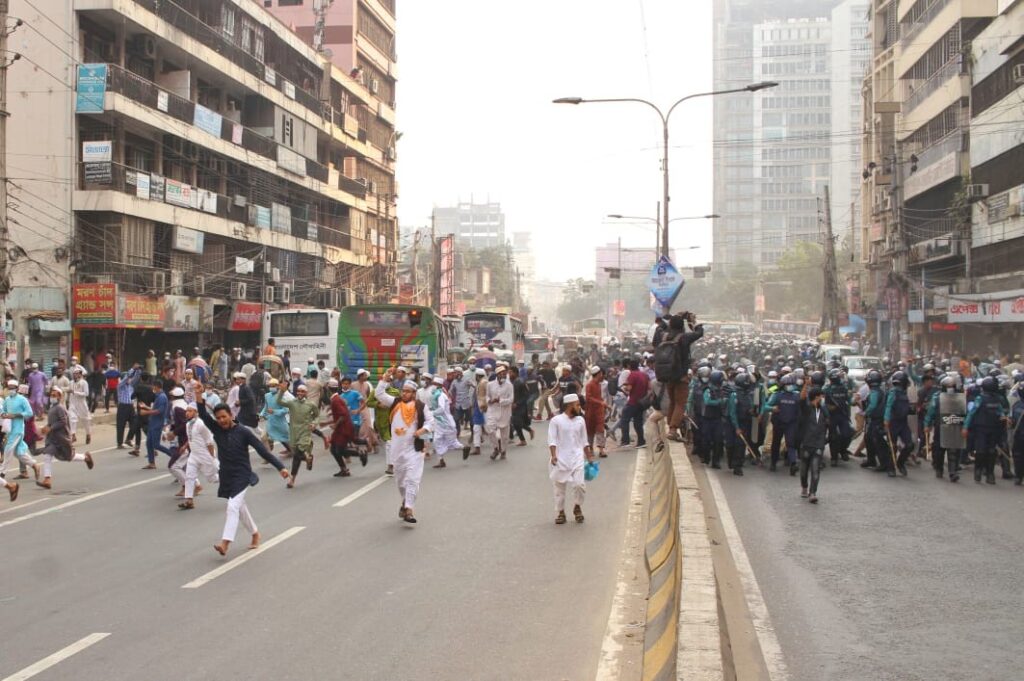 Dhaka, Dec 04 – The law enforcement came down on anti-sculpture protesters in the city’s Paltan intersection on Friday.
They brought out a rally from Baitul Mukarram National Mosque after Jumma prayers without Dhaka Metropolitan Police’s (DMP) approval, the law enforcers said.

Several Muslim devotees, reportedly followers of Hefazat-e-Islam Bangladesh Joint Secretary General Mamunul Haque, took to the street in protest, defying police barricade at around 2.15 pm, witnesses said.
They started chanting slogans against sculptures and the government.
The police said a group of Muslim devotees was protesting at the north gate of Baitul Mukarram after the Jumma prayers.
“They were not supposed to go out. But they came out on the street suddenly and started marching toward the Paltan intersection.”
When the law enforcers tried to resist the protesters, they clashed with them and started moving toward Kakrail. The police then dispersed the procession.
DMP Motijheel Division Additional Deputy Commissioner Enamul Haque said there is a ban on holding processions in DMP areas without permission.
As a group of devotees started protesting on the street without permission and was chanting anti-government slogans, police tried to stop them, Enamul said.
“But when they started marching toward Kakrail, defying the barricade, the police started baton charging to disperse them.”
“Also, several people have been detained from the procession.”
Hefazat-e-Islam Bangladesh’s recent remarks about the setting up of a sculpture of Bangabandhu Sheikh Mujibur Rahman has sparked widespread debates. – UNB