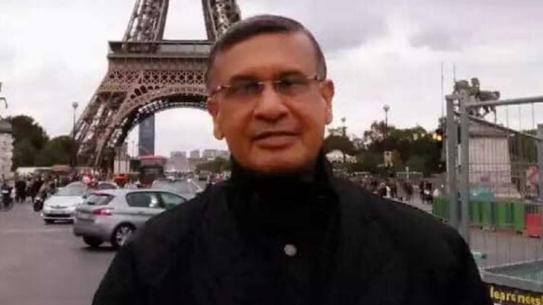 Dhaka, Apr 17:  Police recovered the body of Dr Tareq Shamsur Rahman, a political analyst and former professor of Jahangirnagar University, from his Uttara flat in the city on Saturday. He had been living alone at a flat of Uttara Apartment Project of Uttara Sector-18 in the Diabari area as his wife has been residing in the USA with their daughter.
Being informed by locals, a team of police from Toragh Police Station went to Uttara Apartment Project around 11:30 am and recovered the body after breaking the main door of the flat, said Deputy Commissioner (Uttara Division) of Dhaka Metropolitan Police Md Shahidullah.
He said Prof Tareq’s body was lying on the floor near a bathroom and his two legs were there inside the bathroom.
“The exact cause of his death could not be known yet but there were signs of vomiting on his face,” he said.
Members of the Crime Scene Unit of the Criminal Investigation Department collected evidence from the spot, he added.
Prof Tareq Shamsur Rahman was a former member of the Bangladesh University Grants Commission and chairman of the Department of International Relations at Jahangirnagar University.
Apart from teaching, he used to write columns in newspapers regularly, reports UNB.