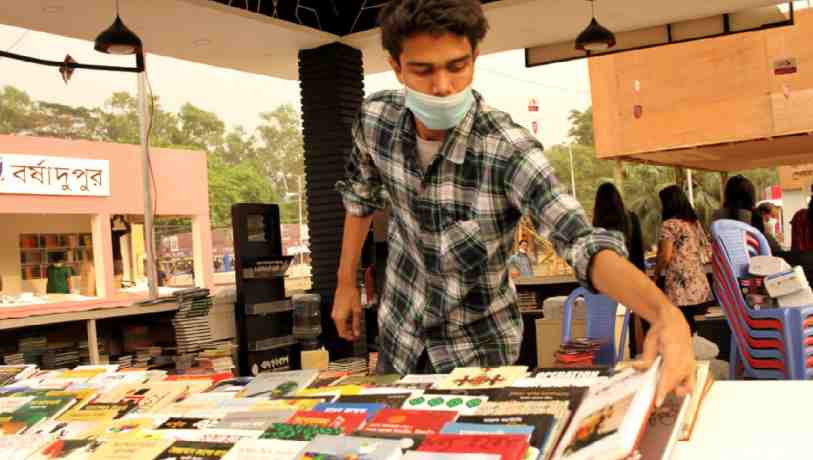 Dhaka, Apr 10:  This year’s Amar Ekushey Boi Mela (Book Fair) is unlike anything the country has seen. There are stalls and books but hardly any visitors and people willing to buy books. A recent surge in Coronavirus cases and subsequent clampdown by the government to contain the transmission have only complicated the situation for the publishers who say they are counting huge losses every day.
It is especially hard for small publishers.
The Bangla Academy went ahead with the fair ignoring recommendations of the Directorate General of Health Services (DGHS).
Salespersons at the fair said that there was hardly any sale. Most people are here for visit, not to buy books, they said.
“This edition lacks the vibe and lustre of a regular book fair,” one of the salespersons said. “The usual crowd of visitors, writers and publishers is missing. The sale has been frustrating.”
Madhav Chandra Das, the publisher of Troye, was disappointed at the turnout.
“There are no readers. Most of the people you see are friends, relatives and acquaintances of the new writers,” he said.
A Book Fair Unlike Any Other
Very few people, visitors, writers, readers and publishers attended the fair compared to the previous years. Many stalls were closed.
Salespersons said the sale had dipped to almost zero during the coronavirus outbreak. And the weeklong lockdown has worsened things.
The number of visitors has increased since the government permitted public transport to resume operations, said the sales staff.
Fewer publishers have participated in this year’s edition and everyone is trying to determine how big the financial loss would be.
Writer Nurjahan, who came to the fair, described the situation as “very sad”. She said they are turning their focus on online shops with fewer visitors.
President of Bangladesh Creative Publishers Association and proprietor of Samay Prakashan Farid Uddin said the visiting hour of the fair was odd.
Earlier, the fair remained open from 3pm to 9pm on weekdays, from 11am to 9pm on Fridays and Saturdays. Many publishers suggested going back to the previously schedule since public transport is being operated.
Farid said only 40 percent of books were sold in the last 20 days compared to the last year’s fair. He said it would take three to four years to recover the losses.
A total of 2,333 books, including 47 on Thursday, have so far hit the fair.

The Amar Ekushey Book Fair commenced on March 18 at Bangla Academy and Suhrawardy Udyan maintaining health guidelines.
It was postponed during its traditional month of February amid the virus outbreak.
This year’s fair was dedicated to the memories of the martyrs of the Liberation War. The main theme is “Birth Centenary of Father of the Nation Bangabandhu Sheikh Mujibur Rahman and Golden Jubilee of Independence”.
The land earmarked for this year’s fair has been expanded to 1,500,000 sq ft while 834 units have been allocated to 540 organisations.
This year, the ‘Shishu Prohor’ has been cancelled and the children’s corner has been shifted to Suhrawardy Udyan.
For the fair, the authorities have allotted 154 units of the Bangla Academy ground to 107 organisations and 680 units of the Suhrawardy Udyan to 433 organisations.
Bangla Academy is exhibiting 115 newly-printed and reprinted books at this year’s fair.
Hand sanitisation booths were set at all entrances for the visitors and wearing a face mask was made mandatory.
‘Chittaranjan Saha Memorial Award’ will be distributed among the best publishers, while ‘Munir Chowdhury Memorial Award will be conferred upon three organisations for publishing the best books in the 2020 fair.
‘Rokanuzzaman Khan Dadabhai Memorial Award’ will be awarded to the best children book, and ‘Artist Qayyum Chowdhury Memorial Award’ for showing artistic intelligence at stall building, will be announced at the fair.

The month-long book fair is arranged every year in February commemorating the sacrifices of the gallant sons of the soil who sacrificed their lives on February 21, 1952 for establishing Bangla as the mother tongue.
The traditional Amar Ekushey Book Fair began informally in 1972 at the Bangla Academy premises. The academy officially took the responsibility to arrange the fair every year in 1978.
It was then named ‘Amar Ekushey Grantha Mela’ and a guideline was laid out in this regard in 1984, reports UNB.