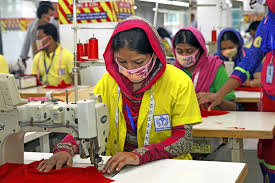 DHAKA, March 7, 2020 (BSS) – The top US trade official for South and Central Asia has said Bangladeshi readymade garments (RMG) in the United States expanded their market in recent years, attributing the development to
improved product quality and compliance factors like workplace safety.

“Buyers in the US recognized that Bangladesh is producing high quality garments those are appealing to US consumers,” Assistant US Trade Representative (USTR) for South and Central Asia Christopher Wilson told BSS.

Talking to BSS diplomatic correspondent Tanzim Anwar he said the improvement of workplace safety issue alongside the product quality enhanced US importers “degree of confidence” on Bangladeshi RMG as an “important
supplier” since the 2013 Rana Plaza setback.

Wilson said Bangladesh emerged as the third-largest garment supplier to the US after China and Vietnam with its current stake in US market being seven percent.

He said in the last calendar year of 2019 Bangladesh RMG’s export volume was worth US$6.8 billion and the volume “has continued to grow”.

Wilson is now in Dhaka in connection with the 5th round of Bangladesh-US Trade and Investment Cooperation Forum Agreement (TICFA) meeting held on Thursday while he talked to the national news agency after the event.

According to official figures the two-way Bangladesh-US trade volume in 2019 was around US$9 billion, an amount which was doubled in 10 years.

Asked if the US tariff rate was supporting or hindering Bangladeshi RMG exports compared to products from other countries to US, Wilson said “we obviously do apply import tariffs in garments sector”.

But Bangladesh’s performance indicated that tariffs were no impediment in its ability for growing access to the US market.

“The tariffs that Bangladesh products facing in the US market that are equivalent to those places by China and Vietnam. So, there is no discriminatory treatment in terms of tariffs,” Wilson added.

Garment products account for 95 percent of Bangladesh’s total exports to the US market while US imposes 15.62 percent duty for RMG imports inside their country.

Wilson said US companies became enthusiastic for investing in Bangladesh as it appeared to be a large market with rapid growth and in many respects Bangladesh government’s policy seemed worked in attracting foreign
investments.

He, however, said the US entrepreneurs were concerned about custom proceeding delay, difficulties in capital and profit repatriation as well as “lack of transparency in issuing various trade related licenses”.

The US official said the concerns were required to be addressed for bettering the investment climate “as these issues make big impact on business companies those are working on the international supply chain”.

Wilson said US drew Bangladesh government’s attention to these concerns seeking appropriate measures on Dhaka part at the just concluded TICFA meeting, where his country simultaneously lauded Dhaka’s recent steps to
adopt some conventions on Intellectual Property Rights (IPR) related to WTO rules. Asked for comments about concerns involving bilateral TICFA, the US official ruled them out saying since the deal was signed in 2013 it
contributed to keep stability in US-Bangladesh trade relationship.

“Despite having certain tensions in the relationship surrounding the labor issues, the termination of Generalized System of Preference (GSP) benefits,it is very important to note that Bangladesh’s access to the US market has
continued to increase to over the period of time,” he said.

Asked what was the current US stance on Dhaka’s demand for reinstating GSP facility scrapped in 2013, Wilson said it was done against the backdrop of broader range of internationally recognized worker rights issues.

But despite Bangladesh’s some progress regarding the compliance factors, in many respect it remained unsatisfactory and “the question of GSP reinstatement is not currently under active consideration by the US”.

Wilson, however, said the GSP issue appeared insignificant in Bangladesh-US trade relations as Bangladesh suffered nominally from commercial perspective over the GSP issue while its major RMG products was never eligible for its advantage.

Asked how US could assist Bangladesh in handling emerging trade issues in the process of its graduation as a middle-income country in next few years,he said his country would be ready with additional trade related technical
assistance to ease the process, particularly for its capacity building.

“We offered to provide technical assistance to Bangladeshi authority in terms of revising the domestic legal framework in connection with ratify some of the WTO conventions (helping in graduation),” he said.

The US is Bangladesh’s single largest export destination while as a least developed country, 97 per cent of the goods originating from Bangladesh enjoys duty-free benefits in the US markets as per the decision taken World
Trade Organization (WTO) in 2005.